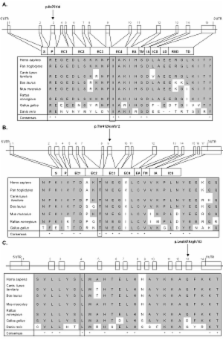 The Ser358Leu mutation in TMEM43, encoding an inner nuclear membrane protein, has been implicated in arrhythmogenic right ventricular cardiomyopathy (ARVC). The pathogenetic mechanisms of this mutation are poorly understood.

To determine the frequency of TMEM43 mutations as a cause of ARVC, we screened 11 ARVC families for mutations in TMEM43 and five desmosomal genes previously implicated in the disease. Functional studies were performed in COS-7 cells transfected with wildtype, mutant, and 1:2 wildtype:mutant TMEM43 to determine the effect of the Ser358Leu mutation on the stability and cellular localization of TMEM43 and other nuclear envelope and desmosomal proteins, assessed by solubility assays and immunofluorescence imaging. mRNA expression was assessed of genes potentially affected by dysfunction of the nuclear lamina.

Three novel mutations in previously documented desmosomal genes, but no mutations in TMEM43, were identified. COS-7 cells transfected with mutant TMEM43 exhibited no change in desmosomal stability. Stability and nuclear membrane localization of mutant TMEM43 and of lamin B and emerin were normal. Mutant TMEM43 did not alter the expression of genes located on chromosome 13, previously implicated in nuclear envelope protein mutations leading to skeletal muscular dystrophies.

Mutant TMEM43 exhibits normal cellular localization and does not disrupt integrity and localization of other nuclear envelope and desmosomal proteins. The pathogenetic role of TMEM43 mutations in ARVC remains uncertain.

James Willerson,  Michael J Giocondo,  M. Schneider … (2006)
Arrhythmogenic right ventricular dysplasia/cardiomyopathy (ARVC) is a genetic disease caused by mutations in desmosomal proteins. The phenotypic hallmark of ARVC is fibroadipocytic replacement of cardiac myocytes, which is a unique phenotype with a yet-to-be-defined molecular mechanism. We established atrial myocyte cell lines expressing siRNA against desmoplakin (DP), responsible for human ARVC. We show suppression of DP expression leads to nuclear localization of the desmosomal protein plakoglobin and a 2-fold reduction in canonical Wnt/beta-catenin signaling through Tcf/Lef1 transcription factors. The ensuing phenotype is increased expression of adipogenic and fibrogenic genes and accumulation of fat droplets. We further show that cardiac-restricted deletion of Dsp, encoding DP, impairs cardiac morphogenesis and leads to high embryonic lethality in the homozygous state. Heterozygous DP-deficient mice exhibited excess adipocytes and fibrosis in the myocardium, increased myocyte apoptosis, cardiac dysfunction, and ventricular arrhythmias, thus recapitulating the phenotype of human ARVC. We believe our results provide for a novel molecular mechanism for the pathogenesis of ARVC and establish cardiac-restricted DP-deficient mice as a model for human ARVC. These findings could provide for the opportunity to identify new diagnostic markers and therapeutic targets in patients with ARVC.

Lamin B1 is required for mouse development and nuclear integrity.

Philippe Young,  Laurent Vergnes,  Miklós Péterfy … (2004)
Lamins are key structural components of the nuclear lamina, an intermediate filament meshwork that lies beneath the inner nuclear membrane. Lamins play a role in nuclear architecture, DNA replication, and gene expression. Mutations affecting A-type lamins have been associated with a variety of human diseases, including muscular dystrophy, cardiomyopathy, lipodystrophy, and progeria, but mutations in B-type lamins have never been identified in humans or in experimental animals. To investigate the in vivo function of lamin B1, the major B-type lamin, we generated mice with an insertional mutation in Lmnb1. The mutation resulted in the synthesis of a mutant lamin B1 protein lacking several key functional domains, including a portion of the rod domain, the nuclear localization signal, and the CAAX motif (the carboxyl-terminal signal for farnesylation). Homozygous Lmnb1 mutant mice survived embryonic development but died at birth with defects in lung and bone. Fibroblasts from mutant embryos grew under standard cell-culture conditions but displayed grossly misshapen nuclei, impaired differentiation, increased polyploidy, and premature senescence. Thus, the lamin B1 mutant mice provide evidence for a broad and nonredundant function of lamin B1 in mammalian development. These mutant mice and cell lines derived from them will be useful models for studying the role of the nuclear lamina in various cellular processes.