A phase I, randomized, open-label, single-dose, 3-period crossover study to evaluate the drug-drug interaction between ZX008 (fenfluramine HCl oral solution) and a regimen of stiripentol, clobazam, and valproate in healthy subjects 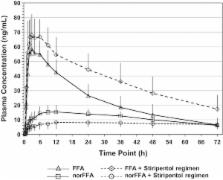 Objective: Phase I, open-label, randomized, single-dose, 3-period crossover study assessing pharmacokinetics (PK) and safety of ZX008, a liquid oral formulation of fenfluramine (FFA) under development for adjunctive treatment of Dravet syndrome and Lennox-Gastaut syndrome, administered with and without a combined antiepileptic drug (AED) regimen of stiripentol (STP), valproate (VPA), and clobazam (CLB) (STP regimen). Materials and methods: 26 healthy adults were administered the following treatments: ZX008 0.8 mg/kg; STP 3,500 mg, CLB 20 mg, VPA 25 mg/kg (max. 1,500 mg); and ZX008 0.8 mg/kg + STP regimen. Dose periods were 17 days apart. Blood samples were obtained for 72 hours after drug administration and used to calculate non-compartmental PK parameters. Results: Statistical bioequivalence-type analysis demonstrated ZX008 had no significant impact on the PK of any drug in the STP regimen, while the STP regimen moderately affected FFA PK. The 3-drug combination increased the geometric mean C max, AUC 0–t, and AUC 0–inf of FFA while reducing the C max and AUC 0–t of its major metabolite, norfenfluramine (norFFA). Adverse events (AEs) were mild to moderate and resolved spontaneously. ZX008 + STP regimen co-administration to healthy adult subjects modestly impacted the number but not severity of AEs. Conclusion: Results show that the STP regimen had a moderate impact on FFA and norFFA PK and ZX008 had no significant impact on the 3 STP regimen drugs. ZX008 would not be expected to alter the clinical response of patients to this regimen by means of an effect on PK. When administering these drugs together, a downward dose adjustment of ZX008 may be warranted.

Successful use of fenfluramine as an add-on treatment for Dravet syndrome.

Berten Ceulemans,  Marc J C Boel,  Katrien Leyssens … (2012)
Despite the development of new antiepileptic drugs, Dravet syndrome frequently remains therapy resistant and is a catastrophic epilepsy syndrome. Fenfluramine is an amphetamine-like drug that has been used in the past as a part of antiobesity treatments. Because of the possible cardiac adverse effects (valve thickening, pulmonary hypertension) associated with use of fenfluramine, it was withdrawn from the market in 2001. In Belgium, a Royal Decree permitted examination of the potential anticonvulsive effects of fenfluramine in a clinical trial consisting of a small group of patients diagnosed with Dravet syndrome.

R Porter,  H. Lamb,  M Sheardown … (1999)
1. The goal of this study was to characterize the agonist pharmacology of human 5-HT2A, 5-HT2B and 5-HT2C (VSV) receptors expressed in CHO-K1 (Chinese hamster ovary) cells. 2. We used a fluorometric imaging plate reader (FLIPR) which allows rapid detection of rises in intracellular calcium levels upon the addition of agonists. 3. Stimulation of all three receptors by 5-HT caused a robust concentration dependent increase in intracellular calcium levels. No such effect was observed from non-transfected control CHO-K1 cells. 4. The rank order of potency of agonists at the different receptor subtypes varied. Tryptamines, BW-723C86, d-norfenfluramine, Ro 60-0175 and LSD exhibited the following rank order of potency; 5-HT2B>5-HT2C>5-HT2A. Piperazines such as m-Chlorophenylpiperazine (mCPP), ORG-12962, MK-212 and also ORG-37684 exhibited a rank order of potency of 5-HT2C>5-HT2B>5-HT2A. The phenylisopropylamines DOI and DOB had a rank order of 5-HT2A>5-HT2B>5-HT2C. 5. Many agonists tested had partial agonist actions when compared to 5-HT, and a wide range of relative efficacies were exhibited, which was cell line dependent. For example, mCPP had a relative efficacy of 65% at 5-HT2C receptors but <25% at either 5-HT2A or 5-HT2B receptors. 6. Interpretation of literature values of functional assays using different cell lines, different receptor expression levels and different receptor isoforms, is complex. Species differences and the previous use of antagonist radioligands to characterize agonist potency in binding assays emphasizes the importance of studying agonists in the same experiment using the same assay conditions and parental cell lines.

Berten Ceulemans,  Lieven Lagae,  Bernard P Paelinck … (2016)
Dravet syndrome (DS) is a rare and therapy-resistant epilepsy syndrome. A retrospective analysis of add-on fenfluramine treatment in 12 patients with DS was published in 2012 and provided evidence of a meaningful long-term response. Herein we present the results of a subsequent 5-year prospective observation of this original cohort. Ten patients with a mean current age of 24 years were followed prospectively from 2010 until 2014. The mean current dose of fenfluramine was 0.27 mg/kg/day, with a mean treatment duration of 16.1 years. Seizure frequency was derived from a seizure diary. Cardiac examinations and assessments of clinical effectiveness and adverse events were performed at least annually. Three patients were seizure-free for the entire 5 years, and an additional four patients experienced seizure-free intervals of at least 2 years. Fenfluramine was generally well-tolerated. Two patients had mild (stable) valve thickening on the last echocardiography that was deemed clinically insignificant. No patient had any clinical or echocardiographic signs of pulmonary hypertension. These findings support the long-term control of convulsive seizures by low-dose fenfluramine while being well tolerated in this cohort of patients with DS. After up to 27 years of treatment, no patient has developed any clinical signs or symptoms of cardiac valvulopathy or pulmonary hypertension.