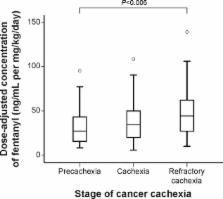 Blood was collected from 21 Japanese cancer patients treated with a 24-hour trans-dermal fentanyl patch during the steady state of fentanyl plasma concentration. Plasma fentanyl concentrations were analyzed using liquid chromatography with tandem mass spectrometry (LC-MS/MS), and the levels were adjusted with the dose of fentanyl. Laboratory data were collected, and the cachexia stage was determined, based on study by Fearon et al. Multiple regression analysis was performed to identify the factors that affected fentanyl plasma concentrations.

Eight patients were classified as precachexia, nine as cachexia, and four as refractory cachexia, and the median dose-adjusted fentanyl concentrations (ng/mL per mg/kg/day) were 27.5, 34.4, and 44.5, respectively. The dose-adjusted fentanyl concentration in patients with refractory cachexia was higher than that in patients with precachexia (Kruskal–Wallis test and post hoc Mann–Whitney U-test, P<0.01). The factors that were found to possibly affect the dose-adjusted concentration of fentanyl included aspartate aminotransferase, C-reactive protein, and estimated glomerular filtration rate, when analyzed as six independent variables (multiple regression analysis, P<0.05).

The dose-adjusted plasma concentrations of fentanyl increased with progression of cancer cachexia. Such an increase is associated with a multifactorial and systemic syndrome in cancer cachexia patients, including lower albumin, higher C-reactive protein, and impaired kidney function. In patients with cancer cachexia, we suggest that evaluation of cancer cachexia might help pain management when using a transdermal fentanyl patch in palliative care.

Inflammatory response: an unrecognised source of variability in the pharmacokinetics and pharmacodynamics of cancer chemotherapy.

Kellie A Slaviero,  Stephen Clarke,  Laurent Rivory (2003)
An important limitation in the use of chemotherapy in cancer treatment is that cytotoxic agents have small margins of safety compared with other drugs. The largely unpredictable pharmacokinetics of cytotoxic agents contribute significantly to differences in toxicity and efficacy between individuals. Over the past few decades, evidence has accumulated that the inflammatory response to conditions such as infection, degenerative disease, and cancer can greatly affect the disposition of drugs. A more recent finding is that the presence of an inflammatory response identifies patients with more aggressive disease and may also compromise the pharmacodynamics of anticancer drugs. In this review, we discuss the changes in the pharmacokinetics of drugs caused by the presence of inflammation. Also, we discuss the modulating role of inflammatory mediators on the pharmacokinetics and pharmacodynamics of cytotoxic agents. We argue that, overall, these factors identify inflammatory response as a potentially important factor in the interindividual variability of response and toxic effects to cancer chemotherapy.

Towards a simple objective framework for the investigation and treatment of cancer cachexia: the Glasgow Prognostic Score.

Euan Douglas,  Donald C. McMillan (2014)
Progress in the treatment of progressive involuntary weight loss in patients with cancer (cancer cachexia) remains dismally slow. Cancer cachexia and its associated clinical symptoms, including weight loss, altered body composition, poor functional status, poor food intake, and poorer quality of life, have long been recognised as indicators of poorer prognosis in the patient with cancer. In order to make some progress a starting point is to have general agreement on what constitutes cancer cachexia. In recent years a plethora of different definitions and consensus statements have been proposed as a framework for investigation and treatment of this debilitating and terminal condition. However, there are significant differences in the criteria used in these and all include poorly defined or subjective criteria and their prognostic value has not been established. The aim of the present review was to examine the hypothesis that a systemic inflammatory response accounts for most of the effect of cancer cachexia and its associated clinical symptoms on poor outcome in patients with cancer. Furthermore, to put forward the case for the Glasgow Prognostic Score to act a simple objective framework for the investigation and treatment of cancer cachexia.

Fentanyl metabolism by human hepatic and intestinal cytochrome P450 3A4: implications for interindividual variability in disposition, efficacy, and drug interactions.

Simon Paine,  K Thummel,  Evan D. Kharasch … (1997)
The synthetic opioid fentanyl undergoes extensive metabolism in humans. Systemic elimination occurs primarily by hepatic metabolism. When administered as a lozenge for oral transmucosal absorption, swallowed fentanyl is subject to first pass metabolism in the liver and possibly small intestine. Little is known, however, about the identity and formation of human fentanyl metabolites. This investigation identified routes of human liver microsomal fentanyl metabolism and their relative importance, tested the hypothesis that fentanyl is metabolized by human duodenal microsomes, and identified the predominantly responsible cytochrome P450 isoforms. A GC/MS assay using deuterated internal standards was developed for fentanyl metabolites. Piperidine N-dealkylation to norfentanyl was the predominant pathway of liver microsomal metabolism. Amide hydrolysis to despropionylfentanyl and alkyl hydroxylation to hydroxyfentanyl were comparatively minor pathways. Hydroxynorfentanyl was identified as a minor, secondary metabolite arising from N-dealkylation of hydroxyfentanyl. Liver microsomal norfentanyl formation was significantly inhibited by the mechanism-based P450 3A4 inhibitor troleandomycin and the P450 3A4 substrate and competitive inhibitor midazolam, and was significantly correlated with P450 3A4 protein content and catalytic activity. Of six expressed human P450 isoforms (P450s 1A2, 2B6, 2C9, 2D6, 2E1, and 3A4), only P450 3A4 exhibited significant fentanyl dealkylation to norfentanyl. These results indicate the predominant role of P450 3A4 in the primary route of hepatic fentanyl metabolism. Human duodenal microsomes also catalyzed fentanyl metabolism to norfentanyl; the average rate was approximately half that of hepatic metabolism. Rates of duodenal norfentanyl formation were diminished by troleandomycin and midazolam, and were significantly correlated with P450 3A4 activity, suggesting a prominent role for P450 3A4. These results demonstrate that human intestinal as well as liver microsomes catalyze fentanyl metabolism, and N-dealkylation by P450 3A4 is the predominant route in both organs. The fraction of fentanyl lozenge that is swallowed likely undergoes significant intestinal, as well as hepatic, first-pass metabolism. Intestinal and hepatic first-pass metabolism, as well as systemic metabolism, may be subject to individual variability in P450 3A4 expression and to drug interactions involving P450 3A4.