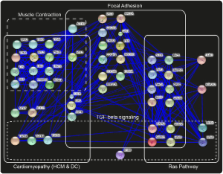 The developed gene atlas represents an important resource for the scientific community researching genetics of cryptorchidism. The collected data will further facilitate development of novel genetic markers and could be of interest for functional studies in animals and human. The proposed network-based systems biology approach elucidates molecular mechanisms underlying co-presence of cryptorchidism and cardiomyopathy in RASopathies. Such approach could also aid in molecular explanation of co-presence of diverse and apparently unrelated clinical manifestations in other syndromes.

Han-Yu Chuang,  Eunjung Lee,  Yu-Tsueng Liu … (2007)
Mapping the pathways that give rise to metastasis is one of the key challenges of breast cancer research. Recently, several large-scale studies have shed light on this problem through analysis of gene expression profiles to identify markers correlated with metastasis. Here, we apply a protein-network-based approach that identifies markers not as individual genes but as subnetworks extracted from protein interaction databases. The resulting subnetworks provide novel hypotheses for pathways involved in tumor progression. Although genes with known breast cancer mutations are typically not detected through analysis of differential expression, they play a central role in the protein network by interconnecting many differentially expressed genes. We find that the subnetwork markers are more reproducible than individual marker genes selected without network information, and that they achieve higher accuracy in the classification of metastatic versus non-metastatic tumors.

An atlas of combinatorial transcriptional regulation in mouse and man.

Timothy Ravasi,  Harukazu Suzuki,  Carlo Cannistraci … (2010)
Combinatorial interactions among transcription factors are critical to directing tissue-specific gene expression. To build a global atlas of these combinations, we have screened for physical interactions among the majority of human and mouse DNA-binding transcription factors (TFs). The complete networks contain 762 human and 877 mouse interactions. Analysis of the networks reveals that highly connected TFs are broadly expressed across tissues, and that roughly half of the measured interactions are conserved between mouse and human. The data highlight the importance of TF combinations for determining cell fate, and they lead to the identification of a SMAD3/FLI1 complex expressed during development of immunity. The availability of large TF combinatorial networks in both human and mouse will provide many opportunities to study gene regulation, tissue differentiation, and mammalian evolution. (c) 2010 Elsevier Inc. All rights reserved.

Xuebing Wu,  Rui Jiang,  Michael Zhang … (2008)
Deciphering the genetic basis of human diseases is an important goal of biomedical research. On the basis of the assumption that phenotypically similar diseases are caused by functionally related genes, we propose a computational framework that integrates human protein–protein interactions, disease phenotype similarities, and known gene–phenotype associations to capture the complex relationships between phenotypes and genotypes. We develop a tool named CIPHER to predict and prioritize disease genes, and we show that the global concordance between the human protein network and the phenotype network reliably predicts disease genes. Our method is applicable to genetically uncharacterized phenotypes, effective in the genome-wide scan of disease genes, and also extendable to explore gene cooperativity in complex diseases. The predicted genetic landscape of over 1000 human phenotypes, which reveals the global modular organization of phenotype–genotype relationships. The genome-wide prioritization of candidate genes for over 5000 human phenotypes, including those with under-characterized disease loci or even those lacking known association, is publicly released to facilitate future discovery of disease genes.