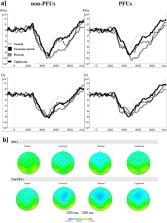 The Event-Related Potentials (ERPs) were recorded during the passive viewing of Facebook-related, pleasant, unpleasant, and neutral pictures in 27 problematic and 26 non-problematic users. Moreover, craving for Facebook usage was collected using a Likert scale.

Regardless of whether Facebook usage is problematic or non-problematic, Facebook-related cues seem to be motivationally relevant stimuli that capture attentional resources in the earlier stages of “motivated” attentional allocation. Moreover, our results support the view that in higher-craving problematic users, reduced abilities to experience emotions would be the result of defective emotion regulation processes that allow craving states to capture more motivational/attentional resources at the expense of other emotional states.

Rune H. B. Christensen, Per B. Brockhoff, Alexandra Kuznetsova (2017)

M M Bradley, P J Lang (1994)
The Self-Assessment Manikin (SAM) is a non-verbal pictorial assessment technique that directly measures the pleasure, arousal, and dominance associated with a person's affective reaction to a wide variety of stimuli. In this experiment, we compare reports of affective experience obtained using SAM, which requires only three simple judgments, to the Semantic Differential scale devised by Mehrabian and Russell (An approach to environmental psychology, 1974) which requires 18 different ratings. Subjective reports were measured to a series of pictures that varied in both affective valence and intensity. Correlations across the two rating methods were high both for reports of experienced pleasure and felt arousal. Differences obtained in the dominance dimension of the two instruments suggest that SAM may better track the personal response to an affective stimulus. SAM is an inexpensive, easy method for quickly assessing reports of affective response in many contexts.

Bruce Cuthbert, Harald Schupp, Margaret M Bradley … (2000)
Emotionally arousing picture stimuli evoked scalp-recorded event-related potentials. A late, slow positive voltage change was observed, which was significantly larger for affective than neutral stimuli. This positive shift began 200-300 ms after picture onset, reached its maximum amplitude approximately 1 s after picture onset, and was sustained for most of a 6-s picture presentation period. The positive increase was not related to local probability of content type, but was accentuated for pictures that prompted increased autonomic responses and reports of greater affective arousal (e.g. erotic or violent content). These results suggest that the late positive wave indicates a selective processing of emotional stimuli, reflecting the activation of motivational systems in the brain.