A new genus and species of Mileewini leafhoppers (Hemiptera, Cicadellidae, Mileewinae) from China, with a key to genera 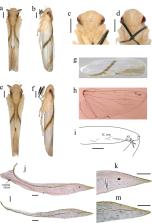 A new leafhopper genus and species, Anzihelus bistriatus Yan & Yang, gen. nov. sp. nov. ( Cicadellidae , Mileewinae , Mileewini ) is described from Sichuan Province, China. Habitus images and figures of the male and female genitalia are provided together with a key to the genera of Mileewini from China.

Tungurahualini, a new tribe of Neotropical leafhoppers, with notes on the subfamily Mileewinae (Hemiptera, Cicadellidae)

C. H. Dietrich (2011)
Abstract A new cicadellid tribe, Tungurahualini, is recognized to include Tungurahuala Kramer, and a related new genus, Ilyapa gen. n., based on six new species. The tribe is included in subfamily Mileewinae, the concept of which is further expanded to include tribes Makilingiini Baker, and Tinteromini Godoy and Webb, taxa previously treated as separate subfamilies. Keys to tribes of Mileewinae (sensu lato) and genera of Tungurahualini are provided. A new species of Tungurahuala , Tungurahuala acuminata sp. n., is also described and keys to species of Tungurahuala and Ilyapa are provided. The new tribe is presently recorded only from cloud forests in the northern Andes Mountains of South America.

The National Science Foundation of China (31672335); the Program of Excellent Innovation Talents, Guizhou Province, China ([2016]-4022); and International cooperation base for insect evolutionary biology and pest control ([2016]-5802).