ERP Modulation during Observation of Abstract Paintings by Franz Kline 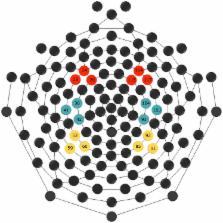 The aim of this study was to test the involvement of sensorimotor cortical circuits during the beholding of the static consequences of hand gestures devoid of any meaning.In order to verify this hypothesis we performed an EEG experiment presenting to participants images of abstract works of art with marked traces of brushstrokes. The EEG data were analyzed by using Event Related Potentials (ERPs). We aimed to demonstrate a direct involvement of sensorimotor cortical circuits during the beholding of these selected works of abstract art. The stimuli consisted of three different abstract black and white paintings by Franz Kline. Results verified our experimental hypothesis showing the activation of premotor and motor cortical areas during stimuli observation. In addition, abstract works of art observation elicited the activation of reward-related orbitofrontal areas, and cognitive categorization-related prefrontal areas. The cortical sensorimotor activation is a fundamental neurophysiological demonstration of the direct involvement of the cortical motor system in perception of static meaningless images belonging to abstract art. These results support the role of embodied simulation of artist’s gestures in the perception of works of art.

Corrado Sinigaglia,  Giacomo Rizzolatti (2010)
The parieto-frontal cortical circuit that is active during action observation is the circuit with mirror properties that has been most extensively studied. Yet, there remains controversy on its role in social cognition and its contribution to understanding the actions and intentions of other individuals. Recent studies in monkeys and humans have shed light on what the parieto-frontal cortical circuit encodes and its possible functional relevance for cognition. We conclude that, although there are several mechanisms through which one can understand the behaviour of other individuals, the parieto-frontal mechanism is the only one that allows an individual to understand the action of others 'from the inside' and gives the observer a first-person grasp of the motor goals and intentions of other individuals.

10/20, 10/10, and 10/5 systems revisited: their validity as relative head-surface-based positioning systems.

Ippeita Dan,  Valer Jurcak,  Daisuke Tsuzuki (2007)
With the advent of multi-channel EEG hardware systems and the concurrent development of topographic and tomographic signal source localization methods, the international 10/20 system, a standard system for electrode positioning with 21 electrodes, was extended to higher density electrode settings such as 10/10 and 10/5 systems, allowing more than 300 electrode positions. However, their effectiveness as relative head-surface-based positioning systems has not been examined. We previously developed a virtual 10/20 measurement algorithm that can analyze any structural MR head and brain image. Extending this method to the virtual 10/10 and 10/5 measurement algorithms, we analyzed the MR images of 17 healthy subjects. The acquired scalp positions of the 10/10 and 10/5 systems were normalized to the Montreal Neurological Institute (MNI) stereotactic coordinates and their spatial variability was assessed. We described and examined the effects of spatial variability due to the selection of positioning systems and landmark placement strategies. As long as a detailed rule for a particular system was provided, it yielded precise landmark positions on the scalp. Moreover, we evaluated the effective spatial resolution of 329 scalp landmark positions of the 10/5 system for multi-subject studies. As long as a detailed rule for landmark setting was provided, 241 scalp positions could be set effectively when there was no overlapping of two neighboring positions. Importantly, 10/10 positions could be well separated on a scalp without overlapping. This study presents a referential framework for establishing the effective spatial resolutions of 10/20, 10/10, and 10/5 systems as relative head-surface-based positioning systems.

Action recognition in the premotor cortex.

G. Rizzolatti,  L. Fadiga,  L. Fogassi … (1996)
We recorded electrical activity from 532 neurons in the rostral part of inferior area 6 (area F5) of two macaque monkeys. Previous data had shown that neurons of this area discharge during goal-directed hand and mouth movements. We describe here the properties of a newly discovered set of F5 neurons ("mirror neurons', n = 92) all of which became active both when the monkey performed a given action and when it observed a similar action performed by the experimenter. Mirror neurons, in order to be visually triggered, required an interaction between the agent of the action and the object of it. The sight of the agent alone or of the object alone (three-dimensional objects, food) were ineffective. Hand and the mouth were by far the most effective agents. The actions most represented among those activating mirror neurons were grasping, manipulating and placing. In most mirror neurons (92%) there was a clear relation between the visual action they responded to and the motor response they coded. In approximately 30% of mirror neurons the congruence was very strict and the effective observed and executed actions corresponded both in terms of general action (e.g. grasping) and in terms of the way in which that action was executed (e.g. precision grip). We conclude by proposing that mirror neurons form a system for matching observation and execution of motor actions. We discuss the possible role of this system in action recognition and, given the proposed homology between F5 and human Brocca's region, we posit that a matching system, similar to that of mirror neurons exists in humans and could be involved in recognition of actions as well as phonetic gestures.

This work was supported by the EU grant TESIS to V.G. The funders had no role in study design, data collection and analysis, decision to publish, or preparation of the manuscript.