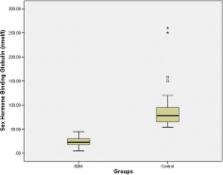 Circulating Sex hormone binding globulin (SHBG) levels are inversely associated with insulin resistance. This study was conducted to compare maternal serum SHBG level between pregnant women with normal glucose tolerance and those with gestational diabetes (GDM) and to investigate the roll of SHBG in GDM diagnosis.

This was a case controlled study of 90 pregnant women, 45 women with GDM and 45 matched controls, attending obstetrics clinic at Ohud Hospital, Madina, Saudi Arabia between April 2014 and March 2015. Measurement of serum SHBG levels by Enzyme-linked immunosorbent assay (ELISA) method were done between 24 and 28 weeks of gestation. The best cut-off point of SHBG to diagnose GDM was calculated in receiver operating characteristic curve.

Patients with GDM have lower circulating levels of SHBG than normal glucose tolerance pregnant women. Circulating concentrations of SHBG represent a potentially useful new biomarker for prediction of risk of GDM beyond the currently established clinical and demographic risk factors.

Sex hormone-binding globulin and risk of type 2 diabetes in women and men.

E D Tyzbir,  Anthony Roman,  S Amini Kafi-abad … (1991)
To assess the longitudinal changes in insulin release and insulin sensitivity in nonobese normal women during gestation, six women were evaluated with oral glucose tolerance testing, body composition analysis, intravenous glucose tolerance tests, and the hyperinsulinemic-euglycemic clamp before conception, at 12 to 14 weeks, and at 34 to 36 weeks' gestation. There was a significant increase in the insulin/glucose ratio (p = 0.028) during the oral glucose tolerance test during gestation. There was also a significant 3.0- to 3.5-fold increase throughout gestation in first-phase (p = 0.001) and second-phase (p = 0.0001) insulin release during the intravenous glucose tolerance test. Peripheral insulin sensitivity was estimated as the glucose infusion rate (in milligrams per kilogram fat-free mass per minute) during the hyperinsulinemic-euglycemic clamp. There was a significant (p = 0.0003) 56% decrease in insulin sensitivity through 36 weeks' gestation. These results are the first to prospectively evaluate the longitudinal changes in maternal carbohydrate metabolism from the time before conception through late gestation with newer methods such as the hyperinsulinemic-euglycemic clamp.