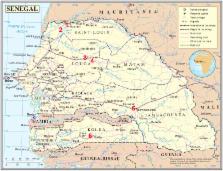 Schistosomes are dioecious parasitic flatworms, which live in the vasculature of their mammalian definitive hosts. They are the causative agent of schistosomiasis, a disease of considerable medical and veterinary importance in tropical and subtropical regions. Schistosomes undergo a sexual reproductive stage within their mammalian host enabling interactions between different species, which may result in hybridization if the species involved are phylogenetically close. In Senegal, three closely related species in the Schistosoma haematobium group are endemic: S. haematobium, which causes urogenital schistosomiasis in humans, and S. bovis and S. curassoni, which cause intestinal schistosomiasis in cows, sheep and goats.

Large-scale multi-loci molecular analysis of parasite samples collected from children and domestic livestock across Senegal revealed that interactions and hybridization were taking place between all three species. Evidence of hybridization between S. haematobium/ S. curassoni and S. haematobium/ S. bovis was commonly found in children from across Senegal, with 88% of the children surveyed in areas of suspected species overlap excreting hybrid miracidia. No S. haematobium worms or hybrids thereof were found in ruminants, although S. bovis and S. curassoni hybrid worms were found in cows. Complementary experimental mixed species infections in laboratory rodents confirmed that males and females of each species readily pair and produce viable hybrid offspring.

These data provide indisputable evidence for: the high occurrence of bidirectional hybridization between these Schistosoma species; the first conclusive evidence for the natural hybridisation between S. haematobium and S. curassoni; and demonstrate that the transmission of the different species and their hybrids appears focal. Hybridization between schistosomes has been known to influence the disease epidemiology and enhance phenotypic characteristics affecting transmission, morbidity and drug sensitivity. Therefore, understanding and monitoring such inter-species interactions will be essential for optimizing and evaluating control strategies across such potential hybrid zones.

Schistosome blood flukes are transmitted through water contact and cause a severe debilitating disease in humans and their livestock. Understanding the biology and epidemiology of these parasites is essential to enable the development of better control strategies in endemic areas. Several species of schistosome exist and species barriers are normally maintained by differences in ecology, host specificity, and evolutionary history. However, hybridization between closely related species can occur if parasites infect the same definitive host. Here we report on the introgression between a human ( S. haematobium) and two ruminant schistosomes ( S. bovis and S. curassoni), the prevalence and distribution of their hybrids and the novel evidence for the presence of S. haematobium/ S. curassoni hybrids in Senegalese children. Modern sampling and genotyping techniques have brought to light the extent of these hybridization events which could have been facilitated by the natural progression in farming, population (both human and livestock) movements and expansion, as well as changes in snail distribution, creating areas of sympatric transmission. Hybridization can lead to phenotypic characteristics that can influence disease epidemiology and control success, highlighting the importance of monitoring these evolving hybrid zones.

Hybridization as an invasion of the genome.

James Mallet (2005)
Hybridization between species is commonplace in plants, but is often seen as unnatural and unusual in animals. Here, I survey studies of natural interspecific hybridization in plants and a variety of animals. At least 25% of plant species and 10% of animal species, mostly the youngest species, are involved in hybridization and potential introgression with other species. Species in nature are often incompletely isolated for millions of years after their formation. Therefore, much evolution of eventual reproductive isolation can occur while nascent species are in gene-flow contact, in sympatry or parapatry, long after divergence begins. Although the relative importance of geographic isolation and gene flow in the origin of species is still unknown, many key processes involved in speciation, such as 'reinforcement' of post-mating isolation by the evolution of assortative mating, will have ample opportunity to occur in the presence of continuing gene flow. Today, DNA sequence data and other molecular methods are beginning to show that limited invasions of the genome are widespread, with potentially important consequences in evolutionary biology, speciation, biodiversity, and conservation.

Ole Seehausen (2004)
Whether interspecific hybridization is important as a mechanism that generates biological diversity is a matter of controversy. Whereas some authors focus on the potential of hybridization as a source of genetic variation, functional novelty and new species, others argue against any important role, because reduced fitness would typically render hybrids an evolutionary dead end. By drawing on recent developments in the genetics and ecology of hybridization and on principles of ecological speciation theory, I develop a concept that reconciles these views and adds a new twist to this debate. Because hybridization is common when populations invade new environments and potentially elevates rates of response to selection, it predisposes colonizing populations to rapid adaptive diversification under disruptive or divergent selection. I discuss predictions and suggest tests of this hybrid swarm theory of adaptive radiation and review published molecular phylogenies of adaptive radiations in light of the theory.

D. Rosenthal,  Olivier Raymond,  Takuya Nakazato … (2003)
Hybridization is frequent in many organismal groups, but its role in adaptation is poorly understood. In sunflowers, species found in the most extreme habitats are ancient hybrids, and new gene combinations generated by hybridization are speculated to have contributed to ecological divergence. This possibility was tested through phenotypic and genomic comparisons of ancient and synthetic hybrids. Most trait differences in ancient hybrids could be recreated by complementary gene action in synthetic hybrids and were favored by selection. The same combinations of parental chromosomal segments required to generate extreme phenotypes in synthetic hybrids also occurred in ancient hybrids. Thus, hybridization facilitated ecological divergence in sunflowers.

This research was funded by the EU grant CONTRAST (FP6 STREP contract no: 032203), http://www.eu-contrast.eu and the NHM and by The Schistosomiasis Consortium for Operational Research and Evaluation (SCORE) during the writing of the manuscript. The funders had no role in study design, data collection and analysis, decision to publish, or preparation of the manuscript.