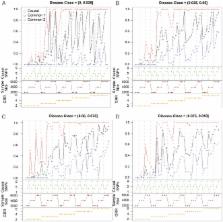 A large number of different common variants has been associated with very modest increases of risk for various common diseases. A simulation study shows that rare variants with much greater impacts on disease risk may be responsible for some of these associations.

Genome-wide association studies (GWAS) have now identified at least 2,000 common variants that appear associated with common diseases or related traits ( http://www.genome.gov/gwastudies), hundreds of which have been convincingly replicated. It is generally thought that the associated markers reflect the effect of a nearby common (minor allele frequency >0.05) causal site, which is associated with the marker, leading to extensive resequencing efforts to find causal sites. We propose as an alternative explanation that variants much less common than the associated one may create “synthetic associations” by occurring, stochastically, more often in association with one of the alleles at the common site versus the other allele. Although synthetic associations are an obvious theoretical possibility, they have never been systematically explored as a possible explanation for GWAS findings. Here, we use simple computer simulations to show the conditions under which such synthetic associations will arise and how they may be recognized. We show that they are not only possible, but inevitable, and that under simple but reasonable genetic models, they are likely to account for or contribute to many of the recently identified signals reported in genome-wide association studies. We also illustrate the behavior of synthetic associations in real datasets by showing that rare causal mutations responsible for both hearing loss and sickle cell anemia create genome-wide significant synthetic associations, in the latter case extending over a 2.5-Mb interval encompassing scores of “blocks” of associated variants. In conclusion, uncommon or rare genetic variants can easily create synthetic associations that are credited to common variants, and this possibility requires careful consideration in the interpretation and follow up of GWAS signals.

It has long been assumed that common genetic variants of modest effect make an important contribution to common human diseases, such as most forms of cardiovascular disease, asthma, and neuropsychiatric disease. Genome-wide scans evaluating the role of common variation have now been completed for all common disease using technology that claims to capture greater than 90% of common variants in major human populations. Surprisingly, the proportion of variation explained by common variation appears to be very modest, and moreover, there are very few examples of the actual variant being identified. At the same time, rare variants have been found with very large effects. Now it is demonstrated in a simulation study that even those signals that have been detected for common variants could, in principle, come from the effect of rare ones. This has important implications for our understanding of the genetic architecture of human disease and in the design of future studies to detect causal genetic variants.

T Thorgeirsson,  Nicholas Walker,  Markus Nöthen … (2008)
Reduced fecundity, associated with severe mental disorders, places negative selection pressure on risk alleles and may explain, in part, why common variants have not been found that confer risk of disorders such as autism, schizophrenia and mental retardation. Thus, rare variants may account for a larger fraction of the overall genetic risk than previously assumed. In contrast to rare single nucleotide mutations, rare copy number variations (CNVs) can be detected using genome-wide single nucleotide polymorphism arrays. This has led to the identification of CNVs associated with mental retardation and autism. In a genome-wide search for CNVs associating with schizophrenia, we used a population-based sample to identify de novo CNVs by analysing 9,878 transmissions from parents to offspring. The 66 de novo CNVs identified were tested for association in a sample of 1,433 schizophrenia cases and 33,250 controls. Three deletions at 1q21.1, 15q11.2 and 15q13.3 showing nominal association with schizophrenia in the first sample (phase I) were followed up in a second sample of 3,285 cases and 7,951 controls (phase II). All three deletions significantly associate with schizophrenia and related psychoses in the combined sample. The identification of these rare, recurrent risk variants, having occurred independently in multiple founders and being subject to negative selection, is important in itself. CNV analysis may also point the way to the identification of additional and more prevalent risk variants in genes and pathways involved in schizophrenia.

The future of genetic studies of complex human diseases.

Publisher ID: 09-PLBI-RA-1989R3
DOI: 10.1371/journal.pbio.1000294
PMC ID: 2811148
PubMed ID: 20126254
Copyright statement: Dickson et al. This is an open-access article distributed under the terms of the Creative Commons Attribution License, which permits unrestricted use, distribution, and reproduction in any medium, provided the original author and source are credited.