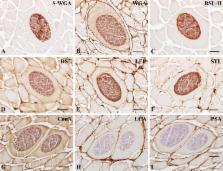 Fathy Abdel-Ghaffar,  Kareem Morsy,  Heinz Mehlhorn … (2012)
In the present study, out of 200, 120 (60%) Plectropomus maculates fish were found to be naturally infected with Kudoa sp. The infection was intensive and appeared as clusters of ovoid to ellipsoidal plasmodia being restricted to the cardiac muscles. More than 100 plasmodia were counted per infected heart and measured 1.53 ± 0.2 (1.2-2.5) × 0.65 ± 0.2 (0.63-0.80) mm. On the basis of spore morphology, the parasite was identified as Kudoa sp. The spore measures 4.8 ± 0.3 (4.7-6.8) × .0 ± 0.3 (4.6-6.5) μm. The four polar capsules were pyrifom in shape measuring 1.4 ± 0.2 (1.3-3.5) × 1.2 ± 0.2 (1.1-2.2) μm. Transmission electron microscopy showed that the plasmodia were bordered by a single membrane which invaginates into pinocytotic canals. Adjacent to the plasmodial wall, the generative cells and the early pansporoblasts were located peripherally. The developmental stages characterizing sporogenesis, capsulogenisis, and valvogenesis of the present parasites were ultrastructurally studied.

Detection of carbohydrate terminals in the enteric parasite Enteromyxum scophthalmi (Myxozoa) and possible interactions with its fish host Psetta maxima.

Leandro Redondo,  P. Alvarez Cartelle,  O Palenzuela … (2008)
The existence and localisation of carbohydrate terminals in Enteromyxum scophthalmi stages was investigated at light (LM) and transmission electron microscopes (TEM) using lectin histochemistry techniques, with the aim of contributing to elucidate the participation of carbohydrate-lectin interactions in the parasite invasion and relationships with the fish host. The presence of abundant mannose and/or glucose residues was demonstrated by the intense staining by concanavalin A at both LM and TEM. The staining pattern obtained with soybean agglutinin and Bandeiraea simplicifolia I (BSI) indicated the abundance of N-acetyl-galactosamine and D-galactose at a lesser extent. The lectins wheat germ agglutinin, BSI and Ulex europaeus agglutinin produced weaker marks. Most lectins recognised structures present in both pre-sporogonic and sporogonic stages, though the glycosidic pattern and/or staining intensity varied between developmental stages. No staining was obtained with Sambucus nigra agglutinin. The TEM studies demonstrated glucose-mannose, N-acetyl-glucosamine, N-acetyl-galactosamine and alpha-D-galactose as dominant structures at the parasite membrane and host-parasite interface, suggesting a role in host-parasite interactions. All these terminals were also detected in the mitochondria of P cells and were scant in the S cells and nuclei. In turbot intestine, mannose-glucose terminals and N-acetyl-glucosamine were labelled on the epithelial brush border and in the mucous cells and rodlet cells. The relevance of these findings in relation to the host-parasite interaction is discussed.