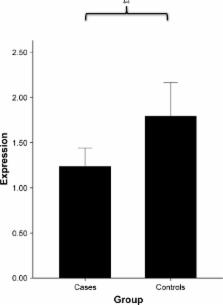 Previous studies have suggested that β 2-adrenergic receptor ( ADRB2) is associated with COPD. However, the role of genetic polymorphisms in ADRB2 on COPD has not been evaluated yet.

One single nucleotide polymorphism (rs12654778), located upstream of ADRB2, showed a significant association with COPD by the logistic regression analysis after adjusting for age, sex and smoking history ( p=0.04) in 200 COPD patients and 222 controls from southwest Chinese population. Furthermore, the luciferase assay indicated that rs12654778-A allele reduced the relative promoter activity by ~26% compared with rs12654778-G allele ( p=0.0034). The chromatin immunoprecipitation analysis demonstrated that rs12654778 modulated the binding affinity of transcription factor neurofibromin 1. In addition, a significantly reduced expression of ADRB2 in COPD patients was observed, compared with normal controls ( p=0.017).

Our findings suggest a previously unknown mechanism linking allele-specific effects of rs12654778 on ADRB2 expression to COPD onset, for the first time.

Michael A Eberle,  Qian Yi,  Deborah Nickerson … (2003)
Common genetic polymorphisms may explain a portion of the heritable risk for common diseases. Within candidate genes, the number of common polymorphisms is finite, but direct assay of all existing common polymorphism is inefficient, because genotypes at many of these sites are strongly correlated. Thus, it is not necessary to assay all common variants if the patterns of allelic association between common variants can be described. We have developed an algorithm to select the maximally informative set of common single-nucleotide polymorphisms (tagSNPs) to assay in candidate-gene association studies, such that all known common polymorphisms either are directly assayed or exceed a threshold level of association with a tagSNP. The algorithm is based on the r(2) linkage disequilibrium (LD) statistic, because r(2) is directly related to statistical power to detect disease associations with unassayed sites. We show that, at a relatively stringent r(2) threshold (r2>0.8), the LD-selected tagSNPs resolve >80% of all haplotypes across a set of 100 candidate genes, regardless of recombination, and tag specific haplotypes and clades of related haplotypes in nonrecombinant regions. Thus, if the patterns of common variation are described for a candidate gene, analysis of the tagSNP set can comprehensively interrogate for main effects from common functional variation. We demonstrate that, although common variation tends to be shared between populations, tagSNPs should be selected separately for populations with different ancestries.

T Heinemeyer (1998)
TRANSFAC, TRRD (Transcription Regulatory Region Database) and COMPEL are databases which store information about transcriptional regulation in eukaryotic cells. The three databases provide distinct views on the components involved in transcription: transcription factors and their binding sites and binding profiles (TRANSFAC), the regulatory hierarchy of whole genes (TRRD), and the structural and functional properties of composite elements (COMPEL). The quantitative and qualitative changes of all three databases and connected programs are described. The databases are accessible via WWW:http://transfac.gbf.de/TRANSFAC orhttp://www.bionet.nsc.ru/TRRD