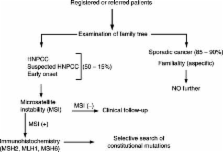 D Shibata,  S Malkhosyan,  M Perucho … (1993)
Spontaneous errors in DNA replication have been suggested to play a significant role in neoplastic transformation and to explain the chromosomal alterations seen in cancer cells. A defective replication factor could increase the mutation rate in clonal variants arising during tumour progression, but despite intensive efforts, increases in tumour cell mutation rates have not been unambiguously shown. Here we use an unbiased genomic fingerprinting technique to show that 12 per cent of colorectal carcinomas carry somatic deletions in poly(dA.dT) sequences and other simple repeats. We estimate that cells from these tumours can carry more than 100,000 such mutations. Only tumours with affected poly(dA.dT) sequences carry mutations in the other simple repeats examined, and such mutations can be found in all neoplastic regions of multiple tumours from the same patient, including adenomas. Tumours with these mutations show distinctive genotypic and phenotypic features. We conclude that these mutations reflect a previously undescribed form of carcinogenesis in the colon (predisposition to which may be inherited) mediated by a mutation in a DNA replication factor resulting in reduced fidelity for replication or repair (a 'mutator mutation').

Heikki J Järvinen,  Markku Aarnio,  Harri Mustonen … (2000)
Identification of the hereditary nonpolyposis colorectal cancer (HNPCC) syndrome enables prevention of colorectal cancer (CRC) by means of colonoscopy and polypectomies. We evaluated the efficacy of screening in a controlled trial over 15 years. Incidence of CRC and survival were compared in 2 cohorts of at-risk members of 22 families with HNPCC. Colonic screening at 3-year intervals was arranged for 133 subjects; 119 control subjects had no screening. Genetic testing was offered to subjects in whose families the causative mutation was known. CRC developed in 8 screened subjects (6%) compared with 19 control subjects (16 %; P = 0.014). The CRC rate was reduced by 62%. In mutation-positive subjects alone, the CRC rates were 18% in screened subjects and 41% in controls (P = 0.02). The decrease resulted from the removal of adenomas in 13 mutation-positive individuals (30%) and in 6 subjects with unknown mutation status (40%). All CRCs in the study group were local, causing no deaths, compared with 9 deaths caused by CRC in the controls. The overall death rates were 10 vs. 26 subjects in the study and control groups (P = 0.003), 4 vs. 12 in mutation-positive subjects (P = 0.05). Colonoscopic screening at 3-year intervals more than halves the risk of CRC, prevents CRC deaths, and decreases overall mortality by about 65% in HNPCC families.