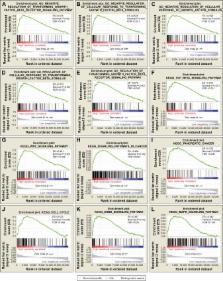 An RNA sequencing dataset and corresponding survival profiles of PAAD were obtained from The Cancer Genome Atlas. Survival analysis and gene set enrichment analysis were used to investigate the prediction value and potential mechanism of ADH genes in PAAD prognosis.

Survival analysis of ADH genes suggests that a high expression of ADH1A (adjusted P=0.037, adjusted hazard ratio [HR] =0.627, 95% CI =0.404–0.972) and ADH6 (adjusted P=0.018, adjusted HR =0.588, 95% CI =0.378–0.914) were associated with a significantly decreased risk of death, while a high expression of ADH5 was associated with a significantly increased risk of death (adjusted P=0.043, adjusted HR =1.564, 95% CI =1.013–2.414). Joint effects analysis of three ADH gene prognostic markers suggests that the prognosis difference for any marker combination was more significant than that for any individual marker. The potential mechanism of ADH1A and ADH6 in PAAD prognosis was that a high expression of ADH1A and ADH6 was involved in the P450 pathway and biological processes, while high ADH5 expression was involved in transforming growth factor β regulation-related pathways and biological processes, Wnt, the cell cycle, ErbB, and mitogen-activated protein kinase signaling pathways.

Our data suggest that ADH1A, ADH5, and ADH6 expression may be potential prognostic markers of PAAD and in combination have a strong interaction and better predictive value for PAAD prognosis.

Cristina Rodriguez-Antona,  C Antona,  M Ingelman … (2006)
The cytochromes P450 (CYPs) are key enzymes in cancer formation and cancer treatment. They mediate the metabolic activation of numerous precarcinogens and participate in the inactivation and activation of anticancer drugs. Since all CYPs that metabolize xenobiotics are polymorphic, much emphasis has been put on the investigation of a relationship between the distribution of specific variant CYP alleles and risk for different types of cancer, but a consistent view does not yet exist. This is to a great extent explained by the fact that the CYPs involved in activation of precarcinogens are in general not functionally polymorphic. This is in contrast to CYPs that are active in drug biotransformation where large interindividual differences in the capacity to metabolize therapeutic drugs are seen as a consequence of polymorphic alleles with altered function. This includes also some anticancer drugs like tamoxifen and cyclophosphamide metabolized by CYP2D6, CYP2C19 and CYP2B6. Some P450 forms are also selectively expressed in tumours, and this could provide a mechanism for drug resistance, but also future therapies using these enzymes as drug targets can be envisioned. This review gives an up-to-date description of our current knowledge in these areas.

Wayne Gold,  Lisa M. Ebert,  H Beger … (1993)
Transforming growth factor beta s (TGF-beta s) constitute a family of bifunctional polypeptide growth factors that either inhibit or stimulate cell proliferation. Perturbations in TGF-beta expression and function may lead to loss of negative constraints on cell growth. In this study, we examined TGF-beta expression in human pancreatic cancer. The distribution of TGF-beta isoforms in 60 human pancreatic cancers was examined using immunohistochemical, Northern blot, and in situ hybridization techniques. Immunohistochemical analysis showed the presence of TGF-beta 1 (47% of tumors), TGF-beta 2 (42% of tumors), and TGF-beta 3 (40% of tumors) in the cancer cells. The presence of TGF-beta 2 was associated with advanced tumor stage (P < 0.05). Furthermore, there was a significant correlation between the absence of TGF-beta s in the tumors and longer postoperative survival. Northern blot analysis indicated that, by comparison with the normal pancreas, pancreatic adenocarcinomas showed 11- (P < 0.001), 7- (P < 0.05), and 9-fold (P < 0.001) increases in the messenger RNA (mRNA) levels encoding TGF-beta 1, TGF-beta 2, and TGF-beta 3, respectively. By in situ hybridization, these mRNA moieties colocalized with their respective proteins in the cancer cells. These findings show that human pancreatic cancers show increased levels of TGF-beta isoforms and enhanced TGF-beta mRNA expression and suggest that the presence of TGF-beta s in pancreatic cancer cells may contribute to disease progression.