Maritime trap-jaw ants (Hymenoptera, Formicidae, Ponerinae) of the Indo-Australian region – redescription of Odontomachus malignus Smith and description of a related new species from Singapore, including first descriptions of males 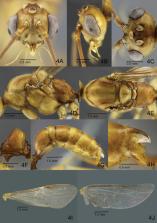 The maritime trap-jaw ant Odontomachus malignus Smith, 1859 is thought to be widespread throughout islands in the Indo-Pacific and parts of the Oriental realm. Because of its unique nesting preference for harsh littoral habitat and distinct morphology, O. malignus has usually been assumed to consist of only one species. We, however, describe a new species similar to O. malignus found in the mangroves of Singapore, Southeast Asia – Odontomachus litoralis sp. nov. We find strong evidence of both species existing in (near) sympatry, and also distinct morphological differences between O. malignus and the new species. Additional complementary DNA evidence in the form of COI barcodes (313 bp) supporting putative species identification and delimitation is provided. Defining morphological characteristics for the O. malignus species group (nested within the larger O. infandus clade) are given in detail for the first time. The worker and queen castes of the new species are described; a redescription of the worker caste of O. malignus , based on specimens from Singapore and the Philippines in addition to the holotype, is also given. The males of both species are also described for the first time, including male genitalia. A preliminary key to most known species of the O. infandus group based on the worker caste is provided.

DNA barcoding and taxonomy in Diptera: a tale of high intraspecific variability and low identification success.

Rudolf Meier, Kwong Shiyang, Gaurav Vaidya … (2006)
DNA barcoding and DNA taxonomy have recently been proposed as solutions to the crisis of taxonomy and received significant attention from scientific journals, grant agencies, natural history museums, and mainstream media. Here, we test two key claims of molecular taxonomy using 1333 mitochondrial COI sequences for 449 species of Diptera. We investigate whether sequences can be used for species identification ("DNA barcoding") and find a relatively low success rate (< 70%) based on tree-based and newly proposed species identification criteria. Misidentifications are due to wide overlap between intra- and interspecific genetic variability, which causes 6.5% of all query sequences to have allospecific or a mixture of allo- and conspecific (3.6%) best-matching barcodes. Even when two COI sequences are identical, there is a 6% chance that they belong to different species. We also find that 21% of all species lack unique barcodes when consensus sequences of all conspecific sequences are used. Lastly, we test whether DNA sequences yield an unambiguous species-level taxonomy when sequence profiles are assembled based on pairwise distance thresholds. We find many sequence triplets for which two of the three pairwise distances remain below the threshold, whereas the third exceeds it; i.e., it is impossible to consistently delimit species based on pairwise distances. Furthermore, for species profiles based on a 3% threshold, only 47% of all profiles are consistent with currently accepted species limits, 20% contain more than one species, and 33% only some sequences from one species; i.e., adopting such a DNA taxonomy would require the redescription of a large proportion of the known species, thus worsening the taxonomic impediment. We conclude with an outlook on the prospects of obtaining complete barcode databases and the future use of DNA sequences in a modern integrative taxonomy.

The use of mean instead of smallest interspecific distances exaggerates the size of the "barcoding gap" and leads to misidentification.

Amrita Srivathsan, Maosheng Foo, Seiki Yamane … (2018)
Biologists frequently sort specimen-rich samples to species. This process is daunting when based on morphology, and disadvantageous if performed using molecular methods that destroy vouchers (e.g., metabarcoding). An alternative is barcoding every specimen in a bulk sample and then presorting the specimens using DNA barcodes, thus mitigating downstream morphological work on presorted units. Such a "reverse workflow" is too expensive using Sanger sequencing, but we here demonstrate that is feasible with an next-generation sequencing (NGS) barcoding pipeline that allows for cost-effective high-throughput generation of short specimen-specific barcodes (313 bp of COI; laboratory cost <$0.50 per specimen) through next-generation sequencing of tagged amplicons. We applied our approach to a large sample of tropical ants, obtaining barcodes for 3,290 of 4,032 specimens (82%). NGS barcodes and their corresponding specimens were then sorted into molecular operational taxonomic units (mOTUs) based on objective clustering and Automated Barcode Gap Discovery (ABGD). High diversity of 88-90 mOTUs (4% clustering) was found and morphologically validated based on preserved vouchers. The mOTUs were overwhelmingly in agreement with morphospecies (match ratio 0.95 at 4% clustering). Because of lack of coverage in existing barcode databases, only 18 could be accurately identified to named species, but our study yielded new barcodes for 48 species, including 28 that are potentially new to science. With its low cost and technical simplicity, the NGS barcoding pipeline can be implemented by a large range of laboratories. It accelerates invertebrate species discovery, facilitates downstream taxonomic work, helps with building comprehensive barcode databases and yields precise abundance information.