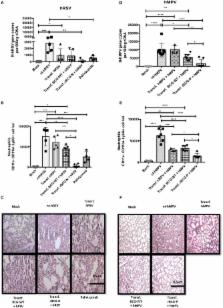 The Human Respiratory Syncytial Virus (hRSV) and the Human Metapneumovirus (hMPV) are two pneumoviruses that are leading agents causing acute lower respiratory tract infections (ALRTIs) affecting young infants, the elderly, and immunocompromised patients worldwide. Since these pathogens were first discovered, many approaches for the licensing of safe and effective vaccines have been explored being unsuccessful to date. We have previously described that immunization with recombinant strains of Mycobacterium bovis Bacillus Calmette-Guérin (rBCG) expressing the hRSV nucleoprotein (rBCG-N) or the hMPV phosphoprotein (rBCG-P) induced immune protection against each respective virus. These vaccines efficiently promoted viral clearance without significant lung damage, mainly through the induction of a T helper 1 cellular immunity. Here we show that upon viral challenge, rBCG-immunized mice developed a protective humoral immunity, characterized by production of antibodies specific for most hRSV and hMPV proteins. Further, isotype switching from IgG1 to IgG2a was observed in mice immunized with rBCG vaccines and correlated with an increased viral clearance, as compared to unimmunized animals. Finally, sera obtained from animals immunized with rBCG vaccines and infected with their respective viruses exhibited virus neutralizing capacity and protected naïve mice from viral replication and pulmonary disease. These results support the notion that the use of rBCG strains could be considered as an effective vaccination approach against other respiratory viruses with similar biology as hRSV and hMPV.

Taxonomy of the order Mononegavirales: update 2016.

Claudio Afonso,  Gaya K. Amarasinghe,  Krisztián Bányai … (2016)
In 2016, the order Mononegavirales was emended through the addition of two new families (Mymonaviridae and Sunviridae), the elevation of the paramyxoviral subfamily Pneumovirinae to family status (Pneumoviridae), the addition of five free-floating genera (Anphevirus, Arlivirus, Chengtivirus, Crustavirus, and Wastrivirus), and several other changes at the genus and species levels. This article presents the updated taxonomy of the order Mononegavirales as now accepted by the International Committee on Taxonomy of Viruses (ICTV).

This article was submitted to Vaccines and Molecular Therapeutics, a section of the journal Frontiers in Immunology

†These authors have contributed equally in this work