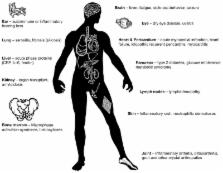 Interleukin-1 (IL-1) is the prototypical inflammatory cytokine: two distinct ligands (IL-1α and IL-1β) bind the IL-1 type 1 receptor (IL-1R1) and induce a myriad of secondary inflammatory mediators, including prostaglandins, cytokines, and chemokines. IL-1α is constitutively present in endothelial and epithelial cells, whereas IL-1β is inducible in myeloid cells and released following cleavage by caspase-1. Over the past 30 years, IL-1-mediated inflammation has been established in a broad spectrum of diseases, ranging from rare autoinflammatory diseases to common conditions such as gout and rheumatoid arthritis (RA), type 2 diabetes, atherosclerosis, and acute myocardial infarction. Blocking IL-1 entered the clinical arena with anakinra, the recombinant form of the naturally occurring IL-1 receptor antagonist (IL-1Ra); IL-1Ra prevents the binding of IL-1α as well as IL-1β to IL-1R1. Quenching IL-1-mediated inflammation prevents the detrimental consequences of tissue damage and organ dysfunction. Although anakinra is presently approved for the treatment of RA and cryopyrin-associated periodic syndromes, off-label use of anakinra far exceeds its approved indications. Dosing of 100 mg of anakinra subcutaneously provides clinically evident benefits within days and for some diseases, anakinra has been used daily for over 12 years. Compared to other biologics, anakinra has an unparalleled record of safety: opportunistic infections, particularly Mycobacterium tuberculosis, are rare even in populations at risk for reactivation of latent infections. Because of this excellent safety profile and relative short duration of action, anakinra can also be used as a diagnostic tool for undefined diseases mediated by IL-1. Although anakinra is presently in clinical trials to treat cancer, this review focuses on anakinra treatment of acute as well as chronic inflammatory diseases.

The inflammasomes: guardians of the body.

Fabio Martinon, Annick Mayor, Jurg Tschopp (2009)
The innate immune system relies on its capacity to rapidly detect invading pathogenic microbes as foreign and to eliminate them. The discovery of Toll-like receptors (TLRs) provided a class of membrane receptors that sense extracellular microbes and trigger antipathogen signaling cascades. More recently, intracellular microbial sensors have been identified, including NOD-like receptors (NLRs). Some of the NLRs also sense nonmicrobial danger signals and form large cytoplasmic complexes called inflammasomes that link the sensing of microbial products and metabolic stress to the proteolytic activation of the proinflammatory cytokines IL-1beta and IL-18. The NALP3 inflammasome has been associated with several autoinflammatory conditions including gout. Likewise, the NALP3 inflammasome is a crucial element in the adjuvant effect of aluminum and can direct a humoral adaptive immune response. In this review, we discuss the role of NLRs, and in particular the inflammasomes, in the recognition of microbial and danger components and the role they play in health and disease.

Chi Leung, Ignatius Yu, Weihong Chen (2012)
Silicosis is a fibrotic lung disease caused by inhalation of free crystalline silicon dioxide or silica. Occupational exposure to respirable crystalline silica dust particles occurs in many industries. Phagocytosis of crystalline silica in the lung causes lysosomal damage, activating the NALP3 inflammasome and triggering the inflammatory cascade with subsequent fibrosis. Impairment of lung function increases with disease progression, even after the patient is no longer exposed. Diagnosis of silicosis needs carefully documented records of occupational exposure and radiological features, with exclusion of other competing diagnoses. Mycobacterial diseases, airway obstruction, and lung cancer are associated with silica dust exposure. As yet, no curative treatment exists, but comprehensive management strategies help to improve quality of life and slow deterioration. Further efforts are needed for recognition and control of silica hazards, especially in developing countries. Copyright © 2012 Elsevier Ltd. All rights reserved.