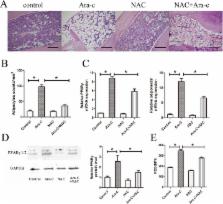 The roles of cellular ROS in adipogenesis were investigated in vivo through an adipocyte hyperplasia marrow model under hematopoietic stress induced by arabinosylcytosine (Ara-C) and in vitro via adipocyte differentiation of human MSCs. ROS levels were detected using the CM-H 2DCFDA probe and Mito-SOX dye. Adipogenesis was evaluated by histopathology and oil red O staining, whereas detection of mRNA levels of antioxidant enzymes and adipogenesis markers was performed using quantitative real-time polymerase chain reaction analysis.

PPAR gamma is required for the differentiation of adipose tissue in vivo and in vitro.

R. Mortensen,  Bruce M Spiegelman,  Eli Moore … (1999)
The process of adipogenesis is known to involve the interplay of several transcription factors. Activation of one of these factors, the nuclear hormone receptor PPAR gamma, is known to promote fat cell differentiation in vitro. Whether PPAR gamma is required for this process in vivo has remained an open question because a viable loss-of-function model for PPAR gamma has been lacking. We demonstrate here that mice chimeric for wild-type and PPAR gamma null cells show little or no contribution of null cells to adipose tissue, whereas most other organs examined do not require PPAR gamma for proper development. In vitro, the differentiation of ES cells into fat is shown to be dependent on PPAR gamma gene dosage. These data provide direct evidence that PPAR gamma is essential for the formation of fat.

Live-animal tracking of individual haematopoietic stem/progenitor cells in their niche.

X. Zhao,  Albert Wu,  S Miake … (2009)
Stem cells reside in a specialized, regulatory environment termed the niche that dictates how they generate, maintain and repair tissues. We have previously documented that transplanted haematopoietic stem and progenitor cell populations localize to subdomains of bone-marrow microvessels where the chemokine CXCL12 is particularly abundant. Using a combination of high-resolution confocal microscopy and two-photon video imaging of individual haematopoietic cells in the calvarium bone marrow of living mice over time, we examine the relationship of haematopoietic stem and progenitor cells to blood vessels, osteoblasts and endosteal surface as they home and engraft in irradiated and c-Kit-receptor-deficient recipient mice. Osteoblasts were enmeshed in microvessels and relative positioning of stem/progenitor cells within this complex tissue was nonrandom and dynamic. Both cell autonomous and non-autonomous factors influenced primitive cell localization. Different haematopoietic cell subsets localized to distinct locations according to the stage of differentiation. When physiological challenges drove either engraftment or expansion, bone-marrow stem/progenitor cells assumed positions in close proximity to bone and osteoblasts. Our analysis permits observing in real time, at a single cell level, processes that previously have been studied only by their long-term outcome at the organismal level.

Ubisemiquinone is the electron donor for superoxide formation by complex III of heart mitochondria.

Julio Turrens,  Adolfo Alexandre,  Albert Lehninger (1985)
Much evidence indicates that superoxide is generated from O2 in a cyanide-sensitive reaction involving a reduced component of complex III of the mitochondrial respiratory chain, particularly when antimycin A is present. Although it is generally believed that ubisemiquinone is the electron donor to O2, little experimental evidence supporting this view has been reported. Experiments with succinate as electron donor in the presence of antimycin A in intact rat heart mitochondria, which contain much superoxide dismutase but little catalase, showed that myxothiazol, which inhibits reduction of the Rieske iron-sulfur center, prevented formation of hydrogen peroxide, determined spectrophotometrically as the H2O2-peroxidase complex. Similarly, depletion of the mitochondria of their cytochrome c also inhibited formation of H2O2, which was restored by addition of cytochrome c. These observations indicate that factors preventing the formation of ubisemiquinone also prevent H2O2 formation. They also exclude ubiquinol, which remains reduced under these conditions, as the reductant of O2. Since cytochrome b also remains fully reduced when myxothiazol is added to succinate- and antimycin A-supplemented mitochondria, reduced cytochrome b may also be excluded as the reductant of O2. These observations, which are consistent with the Q-cycle reactions, by exclusion of other possibilities leave ubisemiquinone as the only reduced electron carrier in complex III capable of reducing O2 to O2-.

The authors were supported by fundings from National Natural Science Foundation of China (Grant Number: 81270572) and National Basic Research 973 Program (Grant Number: 2013CB733701). The funders had no role in study design, data collection and analysis, decision to publish, or preparation of the manuscript.