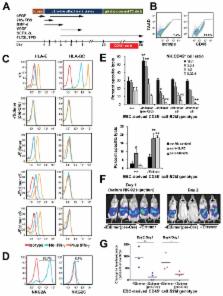 Polymorphisms in the human leukocyte antigen (HLA) class I genes can cause the rejection of pluripotent stem cell (PSC)-derived products in allogeneic recipients. Disruption of the Beta-2 Microglobulin ( B2M) gene eliminates surface expression of all class I molecules, but leaves the cells vulnerable to lysis by natural killer (NK) cells. Here we show that this ‘missing self’ response can be prevented by forced expression of minimally polymorphic HLA-E molecules. We use adeno-associated virus (AAV)-mediated gene editing to knock in HLA-E genes at the B2M locus in human PSCs in a manner that confers inducible, regulated, surface expression of HLA-E single-chain dimers (fused to B2M) or trimers (fused to B2M and a peptide antigen), without surface expression of HLA-A, B or C. These HLA-engineered PSCs and their differentiated derivatives are not recognized as allogeneic by CD8 + T cells, do not bind anti-HLA antibodies, and are resistant to NK-mediated lysis. Our approach provides a potential source of universal donor cells for applications where the differentiated derivatives lack HLA class II expression.

C O’Callaghan,  Geoffrey A. McMichael,  G Ogg … (1998)
The protein HLA-E is a non-classical major histocompatibility complex (MHC) molecule of limited sequence variability. Its expression on the cell surface is regulated by the binding of peptides derived from the signal sequence of some other MHC class I molecules. Here we report the identification of ligands for HLA-E. We constructed tetramers in which recombinant HLA-E and beta2-microglobulin were refolded with an MHC leader-sequence peptide, biotinylated, and conjugated to phycoerythrin-labelled Extravidin. This HLA-E tetramer bound to natural killer (NK) cells and a small subset of T cells from peripheral blood. On transfectants, the tetramer bound to the CD94/NKG2A, CD94/NKGK2B and CD94/NKG2C NK cell receptors, but did not bind to the immunoglobulin family of NK cell receptors (KIR). Surface expression of HLA-E was enough to protect target cells from lysis by CD94/NKG2A+ NK-cell clones. A subset of HLA class I alleles has been shown to inhibit killing by CD94/NKG2A+ NK-cell clones. Only the HLA alleles that possess a leader peptide capable of upregulating HLA-E surface expression confer resistance to NK-cell-mediated lysis, implying that their action is mediated by HLA-E, the predominant ligand for the NK cell inhibitory receptor CD94/NKG2A.

C. Ware,  A. Nelson,  B. Mecham … (2014)
The naïve pluripotent state has been shown in mice to lead to broad and more robust developmental potential relative to primed mouse epiblast cells. The human naïve ES cell state has eluded derivation without the use of transgenes, and forced expression of OCT4, KLF4, and KLF2 allows maintenance of human cells in a naïve state [Hanna J, et al. (2010) Proc Natl Acad Sci USA 107(20):9222-9227]. We describe two routes to generate nontransgenic naïve human ES cells (hESCs). The first is by reverse toggling of preexisting primed hESC lines by preculture in the histone deacetylase inhibitors butyrate and suberoylanilide hydroxamic acid, followed by culture in MEK/ERK and GSK3 inhibitors (2i) with FGF2. The second route is by direct derivation from a human embryo in 2i with FGF2. We show that human naïve cells meet mouse criteria for the naïve state by growth characteristics, antibody labeling profile, gene expression, X-inactivation profile, mitochondrial morphology, microRNA profile and development in the context of teratomas. hESCs can exist in a naïve state without the need for transgenes. Direct derivation is an elusive, but attainable, process, leading to cells at the earliest stage of in vitro pluripotency described for humans. Reverse toggling of primed cells to naïve is efficient and reproducible.