Assessing the feasibility of interrupting the transmission of soil-transmitted helminths through mass drug administration: The DeWorm3 cluster randomized trial protocol 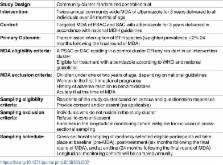 Current control strategies for soil-transmitted helminths (STH) emphasize morbidity control through mass drug administration (MDA) targeting preschool- and school-age children, women of childbearing age and adults in certain high-risk occupations such as agricultural laborers or miners. This strategy is effective at reducing morbidity in those treated but, without massive economic development, it is unlikely it will interrupt transmission. MDA will therefore need to continue indefinitely to maintain benefit. Mathematical models suggest that transmission interruption may be achievable through MDA alone, provided that all age groups are targeted with high coverage. The DeWorm3 Project will test the feasibility of interrupting STH transmission using biannual MDA targeting all age groups. Study sites (population ≥80,000) have been identified in Benin, Malawi and India. Each site will be divided into 40 clusters, to be randomized 1:1 to three years of twice-annual community-wide MDA or standard-of-care MDA, typically annual school-based deworming. Community-wide MDA will be delivered door-to-door, while standard-of-care MDA will be delivered according to national guidelines. The primary outcome is transmission interruption of the STH species present at each site, defined as weighted cluster-level prevalence ≤2% by quantitative polymerase chain reaction (qPCR), 24 months after the final round of MDA. Secondary outcomes include the endline prevalence of STH, overall and by species, and the endline prevalence of STH among children under five as an indicator of incident infections. Secondary analyses will identify cluster-level factors associated with transmission interruption. Prevalence will be assessed using qPCR of stool samples collected from a random sample of cluster residents at baseline, six months after the final round of MDA and 24 months post-MDA. A smaller number of individuals in each cluster will be followed with annual sampling to monitor trends in prevalence and reinfection throughout the trial.

Soil-transmitted helminths (STH) affect 1.45 billion people worldwide, and high intensity infections are associated with anemia, undernutrition and impaired cognition, particularly among children. Mathematical models suggest it may be possible to interrupt the transmission of STH in a community by expanding mass drug administration (MDA) from targeted high-risk groups (primarily school-aged children and women of child-bearing age) to all community members with high coverage. The DeWorm3 Project will test the feasibility of this approach to interrupting the transmission of STH using a series of cluster randomized trials in Benin, India and Malawi. Each study area (population ≥80,000) will be divided into 40 clusters and randomized to community-wide or standard-of-care targeted MDA for three years. Two years following the final round of MDA, prevalence of STH will be compared between arms and transmission interruption assessed in each cluster. The DeWorm3 trials will provide stakeholders with information regarding the potential to switch from STH control to a more ambitious and sustainable strategy.

Rachel L. Pullan,  Jennifer Smith,  Rashmi Jasrasaria … (2014)
Background Quantifying the burden of parasitic diseases in relation to other diseases and injuries requires reliable estimates of prevalence for each disease and an analytic framework within which to estimate attributable morbidity and mortality. Here we use data included in the Global Atlas of Helminth Infection to derive new global estimates of numbers infected with intestinal nematodes (soil-transmitted helminths, STH: Ascaris lumbricoides, Trichuris trichiura and the hookworms) and use disability-adjusted life years (DALYs) to estimate disease burden. Methods Prevalence data for 6,091 locations in 118 countries were sourced and used to estimate age-stratified mean prevalence for sub-national administrative units via a combination of model-based geostatistics (for sub-Saharan Africa) and empirical approaches (for all other regions). Geographical variation in infection prevalence within these units was approximated using modelled logit-normal distributions, and numbers of individuals with infection intensities above given thresholds estimated for each species using negative binomial distributions and age-specific worm/egg burden thresholds. Finally, age-stratified prevalence estimates for each level of infection intensity were incorporated into the Global Burden of Disease Study 2010 analytic framework to estimate the global burden of morbidity and mortality associated with each STH infection. Results Globally, an estimated 438.9 million people (95% Credible Interval (CI), 406.3 - 480.2 million) were infected with hookworm in 2010, 819.0 million (95% CI, 771.7 – 891.6 million) with A. lumbricoides and 464.6 million (95% CI, 429.6 – 508.0 million) with T. trichiura. Of the 4.98 million years lived with disability (YLDs) attributable to STH, 65% were attributable to hookworm, 22% to A. lumbricoides and the remaining 13% to T. trichiura. The vast majority of STH infections (67%) and YLDs (68%) occurred in Asia. When considering YLDs relative to total populations at risk however, the burden distribution varied more considerably within major global regions than between them. Conclusion Improvements in the cartography of helminth infection, combined with mathematical modelling approaches, have resulted in the most comprehensive contemporary estimates for the public health burden of STH. These numbers form an important benchmark upon which to evaluate future scale-up of major control efforts.

Prevention and control of schistosomiasis and soil-transmitted helminthiasis.

(2001)
This report contains the recommendations of a WHO Expert Committee convened to consider the prevention and control of schistosomiasis and soil-transmitted helminth infections. Although these infections remain major public health concerns in many parts of the world, particularly in the poorest developing countries, cost-effective solutions are both available and deliverable. The report reviews the burden of disease, its impact on both health and development, the substantial benefits of treatment, and the safety, efficacy and ease of administration of available anthelminthic drugs. Similarities in the population at risk and in the tools required to combat the problems have prompted moves towards a combined approach to the control of schistosomiasis and soil-transmitted helminthiasis. Such an approach relies largely on epidemiological surveillance, health education, improvements in hygiene and sanitation, and--above all--regular treatment of high-risk groups, particularly school-age children. The report focuses on how these various elements can be achieved, emphasizing the potential of the school system for drug delivery and health education and the opportunities for integration of control activities with existing health programmes. It also stresses that the cost of recommended anthelminthic drugs has now fallen to a level at which it should no longer deter Member States from making treatment widely available in endemic areas. The recommendations of the Expert Committee provide clear and strategic guidance on the implementation of control measures and on ensuring their sustainability.

Funded by: Bill and Melinda Gates Foundation (US)
Award ID: OPP1129535
Award Recipient : Judd L. Walson
The DeWorm3 study is funded through a grant to the Natural History Museum, London from the Bill and Melinda Gates Foundation (OPP1129535, PI JLW). The funders reviewed but were not involved in final decisions regarding the study design and trial procedures. The funders were not involved in the decision to publish the manuscript and will have no role in data collection, analysis or publication of study results.