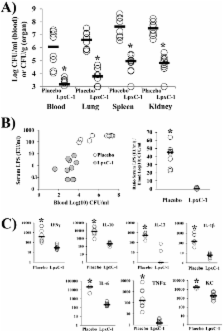 New treatments are needed for extensively drug-resistant (XDR) Gram-negative bacilli (GNB), such as Acinetobacter baumannii. Toll-like receptor 4 (TLR4) was previously reported to enhance bacterial clearance of GNB, including A. baumannii. However, here we have shown that 100% of wild-type mice versus 0% of TLR4-deficient mice died of septic shock due to A. baumannii infection, despite having similar tissue bacterial burdens. The strain lipopolysaccharide (LPS) content and TLR4 activation by extracted LPS did not correlate with in vivo virulence, nor did colistin resistance due to LPS phosphoethanolamine modification. However, more-virulent strains shed more LPS during growth than less-virulent strains, resulting in enhanced TLR4 activation. Due to the role of LPS in A. baumannii virulence, an LpxC inhibitor (which affects lipid A biosynthesis) antibiotic was tested. The LpxC inhibitor did not inhibit growth of the bacterium (MIC > 512 µg/ml) but suppressed A. baumannii LPS-mediated activation of TLR4. Treatment of infected mice with the LpxC inhibitor enhanced clearance of the bacteria by enhancing opsonophagocytic killing, reduced serum LPS concentrations and inflammation, and completely protected the mice from lethal infection. These results identify a previously unappreciated potential for the new class of LpxC inhibitor antibiotics to treat XDR A. baumannii infections. Furthermore, they have far-reaching implications for pathogenesis and treatment of infections caused by GNB and for the discovery of novel antibiotics not detected by standard in vitro screens.

Novel treatments are needed for infections caused by Acinetobacter baumannii, a Gram-negative bacterium that is extremely antibiotic resistant. The current study was undertaken to understand the immunopathogenesis of these infections, as a basis for defining novel treatments. The primary strain characteristic that differentiated virulent from less-virulent strains was shedding of Gram-negative lipopolysaccharide (LPS) during growth. A novel class of antibiotics, called LpxC inhibitors, block LPS synthesis, but these drugs do not demonstrate the ability to kill A. baumannii in vitro. We found that an LpxC inhibitor blocked the ability of bacteria to activate the sepsis cascade, enhanced opsonophagocytic killing of the bacteria, and protected mice from lethal infection. Thus, an entire new class of antibiotics which is already in development has heretofore-unrecognized potential to treat A. baumannii infections. Furthermore, standard antibiotic screens based on in vitro killing failed to detect this treatment potential of LpxC inhibitors for A. baumannii infections.

Jean Patel,  Alicia I. Hidron,  David Pollock … (2008)
To describe the frequency of selected antimicrobial resistance patterns among pathogens causing device-associated and procedure-associated healthcare-associated infections (HAIs) reported by hospitals in the National Healthcare Safety Network (NHSN). Data are included on HAIs (ie, central line-associated bloodstream infections, catheter-associated urinary tract infections, ventilator-associated pneumonia, and surgical site infections) reported to the Patient Safety Component of the NHSN between January 2006 and October 2007. The results of antimicrobial susceptibility testing of up to 3 pathogenic isolates per HAI by a hospital were evaluated to define antimicrobial-resistance in the pathogenic isolates. The pooled mean proportions of pathogenic isolates interpreted as resistant to selected antimicrobial agents were calculated by type of HAI and overall. The incidence rates of specific device-associated infections were calculated for selected antimicrobial-resistant pathogens according to type of patient care area; the variability in the reported rates is described. Overall, 463 hospitals reported 1 or more HAIs: 412 (89%) were general acute care hospitals, and 309 (67%) had 200-1,000 beds. There were 28,502 HAIs reported among 25,384 patients. The 10 most common pathogens (accounting for 84% of any HAIs) were coagulase-negative staphylococci (15%), Staphylococcus aureus (15%), Enterococcus species (12%), Candida species (11%), Escherichia coli (10%), Pseudomonas aeruginosa (8%), Klebsiella pneumoniae (6%), Enterobacter species (5%), Acinetobacter baumannii (3%), and Klebsiella oxytoca (2%). The pooled mean proportion of pathogenic isolates resistant to antimicrobial agents varied significantly across types of HAI for some pathogen-antimicrobial combinations. As many as 16% of all HAIs were associated with the following multidrug-resistant pathogens: methicillin-resistant S. aureus (8% of HAIs), vancomycin-resistant Enterococcus faecium (4%), carbapenem-resistant P. aeruginosa (2%), extended-spectrum cephalosporin-resistant K. pneumoniae (1%), extended-spectrum cephalosporin-resistant E. coli (0.5%), and carbapenem-resistant A. baumannii, K. pneumoniae, K. oxytoca, and E. coli (0.5%). Nationwide, the majority of units reported no HAIs due to these antimicrobial-resistant pathogens.

Lisa Maragakis,  Trish Perl (2008)
Multidrug-resistant Acinetobacter baumannii is recognized to be among the most difficult antimicrobial-resistant gram-negative bacilli to control and treat. Increasing antimicrobial resistance among Acinetobacter isolates has been documented, although definitions of multidrug resistance vary in the literature. A. baumannii survives for prolonged periods under a wide range of environmental conditions. The organism causes outbreaks of infection and health care-associated infections, including bacteremia, pneumonia, meningitis, urinary tract infection, and wound infection. Antimicrobial resistance greatly limits the therapeutic options for patients who are infected with this organism, especially if isolates are resistant to the carbapenem class of antimicrobial agents. Because therapeutic options are limited for multidrug-resistant Acinetobacter infection, the development or discovery of new therapies, well-controlled clinical trials of existing antimicrobial regimens and combinations, and greater emphasis on the prevention of health care-associated transmission of multidrug-resistant Acinetobacter infection are essential.

Cathrin Dammhayn,  Meredith Hackel,  Harald Seifert … (2010)
We have investigated the molecular epidemiology and distribution of carbapenemase genes in 492 imipenem-non-susceptible Acinetobacter baumannii worldwide isolates (North and Latin America, Europe, Asia, South Africa and Australia). MICs were determined by broth microdilution and Etest. The presence of carbapenemase-encoding genes was investigated by PCR. Molecular epidemiology was performed by repetitive sequence-based PCR (rep-PCR; DiversiLab), sequence-type multiplex PCR and PFGE. Imipenem non-susceptibility was associated with ISAba1 upstream of the intrinsic bla(OXA-51-like) or the acquired carbapenemase bla(OXA-23-like), bla(OXA-40-like) or bla(OXA-58-like). Isolates were grouped into eight distinct clusters including European clones I, II and III. European clone II was the largest (246 isolates) and most widespread group (USA, pan-Europe, Israel, Asia, Australia and South Africa). The global dissemination of eight carbapenem-resistant lineages illustrates the success this organism has had in epidemic spread. The acquired OXA enzymes are widely distributed but are not the sole carbapenem resistance determinant in A. baumannii.

This is an open-access article distributed under the terms of the Creative Commons Attribution-Noncommercial-Share Alike 3.0 Unported License, which permits unrestricted noncommercial use, distribution, and reproduction in any medium, provided the original author and source are credited.