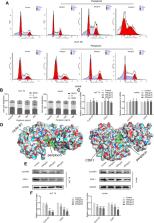 Lymphoma is considered to be one of the most pressing health problems worldwide owing to its high incidence and mortality. Previous studies have shown that periplocin, a naturally occurring compound, inhibits growth and induces apoptosis in several cancers. However, the effects of periplocin on lymphoma and the underlying mechanisms of action remain unclear.

A total of 216 intersecting genes were identified. Numerous cancer-related signaling pathways were visualized using Cytoscape software, with the PI3K-Akt signaling pathway being the highest-ranked pathway related to cell proliferation, apoptosis, and cell cycle progression. HuT 78 and Jurkat cell lines were used to verify the predictions. Periplocin significantly inhibited their proliferation in a dose- and time-dependent manner, but had no effect on the viability of peripheral blood lymphocytes. Flow cytometry revealed that treatment with periplocin increased the apoptotic rate and ratio of HuT 78 and Jurkat cells in the G2/M phase. CDK1 and cyclin B1 complex formation is a key gatekeeper to mitotic division in the G2/M phase. Western blot analysis revealed that periplocin significantly decreased the protein levels of CDK1 and cyclin B1; however, real-time qPCR revealed no effect on gene expression.

Periplocin showed anti-tumor effects in lymphoma cells through multiple targets and signaling pathways, and could be a novel therapeutic agent for the treatment of lymphoma.

Wanqing Chen,  Rongshou Zheng,  Peter D Baade … (2016)
With increasing incidence and mortality, cancer is the leading cause of death in China and is a major public health problem. Because of China's massive population (1.37 billion), previous national incidence and mortality estimates have been limited to small samples of the population using data from the 1990s or based on a specific year. With high-quality data from an additional number of population-based registries now available through the National Central Cancer Registry of China, the authors analyzed data from 72 local, population-based cancer registries (2009-2011), representing 6.5% of the population, to estimate the number of new cases and cancer deaths for 2015. Data from 22 registries were used for trend analyses (2000-2011). The results indicated that an estimated 4292,000 new cancer cases and 2814,000 cancer deaths would occur in China in 2015, with lung cancer being the most common incident cancer and the leading cause of cancer death. Stomach, esophageal, and liver cancers were also commonly diagnosed and were identified as leading causes of cancer death. Residents of rural areas had significantly higher age-standardized (Segi population) incidence and mortality rates for all cancers combined than urban residents (213.6 per 100,000 vs 191.5 per 100,000 for incidence; 149.0 per 100,000 vs 109.5 per 100,000 for mortality, respectively). For all cancers combined, the incidence rates were stable during 2000 through 2011 for males (+0.2% per year; P = .1), whereas they increased significantly (+2.2% per year; P < .05) among females. In contrast, the mortality rates since 2006 have decreased significantly for both males (-1.4% per year; P < .05) and females (-1.1% per year; P < .05). Many of the estimated cancer cases and deaths can be prevented through reducing the prevalence of risk factors, while increasing the effectiveness of clinical care delivery, particularly for those living in rural areas and in disadvantaged populations.

Minoru Kanehisa,  Yoko Sato (2019)
KEGG is a reference knowledge base for biological interpretation of large-scale molecular datasets, such as genome and metagenome sequences. It accumulates experimental knowledge about high-level functions of the cell and the organism represented in terms of KEGG molecular networks, including KEGG pathway maps, BRITE hierarchies, and KEGG modules. By the process called KEGG mapping, a set of protein coding genes in the genome, for example, can be converted to KEGG molecular networks enabling interpretation of cellular functions and other high-level features. Here we report a new version of KEGG Mapper, a suite of KEGG mapping tools available at the KEGG website (https://www.kegg.jp/ or https://www.genome.jp/kegg/), together with the KOALA family tools for automatic assignment of KO (KEGG Orthology) identifiers used in the mapping.