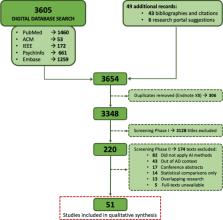 Language is a valuable source of clinical information in Alzheimer’s disease, as it declines concurrently with neurodegeneration. Consequently, speech and language data have been extensively studied in connection with its diagnosis.

Firstly, to summarize the existing findings on the use of artificial intelligence, speech, and language processing to predict cognitive decline in the context of Alzheimer’s disease. Secondly, to detail current research procedures, highlight their limitations, and suggest strategies to address them.

Systematic review of original research between 2000 and 2019, registered in PROSPERO (reference CRD42018116606). An interdisciplinary search covered six databases on engineering (ACM and IEEE), psychology (PsycINFO), medicine (PubMed and Embase), and Web of Science. Bibliographies of relevant papers were screened until December 2019.

Promising results are reported across nearly all 51 studies, but very few have been implemented in clinical research or practice. The main limitations of the field are poor standardization, limited comparability of results, and a degree of disconnect between study aims and clinical applications. Active attempts to close these gaps will support translation of future research into clinical practice.

Ziad S Nasreddine, Natalie Phillips, ValÃ©rie BÃ©dirian … (2005)
To develop a 10-minute cognitive screening tool (Montreal Cognitive Assessment, MoCA) to assist first-line physicians in detection of mild cognitive impairment (MCI), a clinical state that often progresses to dementia. Validation study. A community clinic and an academic center. Ninety-four patients meeting MCI clinical criteria supported by psychometric measures, 93 patients with mild Alzheimer's disease (AD) (Mini-Mental State Examination (MMSE) score > or =17), and 90 healthy elderly controls (NC). The MoCA and MMSE were administered to all participants, and sensitivity and specificity of both measures were assessed for detection of MCI and mild AD. Using a cutoff score 26, the MMSE had a sensitivity of 18% to detect MCI, whereas the MoCA detected 90% of MCI subjects. In the mild AD group, the MMSE had a sensitivity of 78%, whereas the MoCA detected 100%. Specificity was excellent for both MMSE and MoCA (100% and 87%, respectively). MCI as an entity is evolving and somewhat controversial. The MoCA is a brief cognitive screening tool with high sensitivity and specificity for detecting MCI as currently conceptualized in patients performing in the normal range on the MMSE.