Investigation of The Cellular Response to Bone Fractures: Evidence for Flexoelectricity 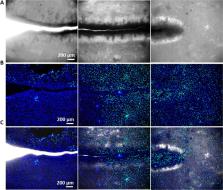 The recent discovery of bone flexoelectricity (strain-gradient-induced electrical polarization) suggests that flexoelectricity could have physiological effects in bones, and specifically near bone fractures, where flexoelectricity is theoretically highest. Here, we report a cytological study of the interaction between crack stress and bone cells. We have cultured MC3T3-E1 mouse osteoblastic cells in biomimetic microcracked hydroxyapatite substrates, differentiated into osteocytes and applied a strain gradient to the samples. The results show a strong apoptotic cellular response, whereby mechanical stimulation causes those cells near the crack to die, as indicated by live-dead and caspase staining. In addition, analysis two weeks post-stimulation shows increased cell attachment and mineralization around microcracks and a higher expression of osteocalcin –an osteogenic protein known to be promoted by physical exercise. The results are consistent with flexoelectricity playing at least two different roles in bone remodelling: apoptotic trigger of the repair protocol, and electro-stimulant of the bone-building activity of osteoblasts.

On the Piezoelectric Effect of Bone

Loss of osteocyte integrity in association with microdamage and bone remodeling after fatigue in vivo.

Mitchell Schaffler,  O Verborgt,  Peter G Gibson (1999)
As a result of fatigue, bone sustains microdamage, which is then repaired by bone-remodeling processes. How osteoclastic activity is targeted at the removal of microdamaged regions of bone matrix is unknown. In the current studies, we tested the hypothesis that changes in osteocyte integrity, through the initiation of regulated cell death (apoptosis), are associated with fatigue-related microdamage and bone resorption. Ulnae of adult rats were fatigue-loaded to produce a known degree of matrix damage. Osteocyte integrity was then assessed histomorphometrically from terminal deoxynucleotidyl transferase-mediated deoxyuridine triphosphate-nick end labeling (TUNEL)-stained sections to detect cells undergoing DNA fragmentation associated with apoptosis; toluidine blue-stained sections were used for secondary morphological confirmation. Ten days after loading, large numbers of TUNEL-positive osteocytes were found in bone surrounding microcracks and in bone surrounding intracortical resorption spaces (approximately 300% increases over controls, p < 0.005). TUNEL labeling in loaded ulnae at sites distant from microcracks or resorption foci did not differ from that in control bone. Osteocytes in toluidine blue-stained sections showed equivalent trends to TUNEL-stained sections, with significant increases in pyknotic nuclei and empty lacunae associated with microcracks and intracortical resorption spaces. TUNEL-positive osteocytes were observed around bone microdamage by 1 day after loading (p < 0.01 relative to baseline), and their number remained elevated throughout the entire experimental period. Increases in empty lacunae and decreases in normal osteocyte numbers were observed over time as well. These studies show that (1) osteocyte apoptosis is induced by bone fatigue, (2) this apoptosis is localized to regions of bone that contain microcracks, and (3) osteoclastic resorption after fatigue also coincides with regions of osteocyte apoptosis. The strong associations between microdamage, osteocyte apoptosis, and subsequent bone remodeling support the hypothesis that osteocyte apoptosis provides a key part of the activation or signaling mechanisms by which osteoclasts target bone for removal after fatigue-induced matrix injury.