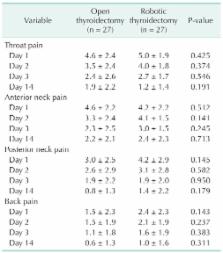 Postoperative pain for robotic thyroid surgeries including bilateral axillo-breast approach (BABA) has not been well studied. In this study, we have developed a self-reporting application (SRA) for iPad and prospectively collected pain scores from open thyroidectomy (OT) and BABA robotic thyroidectomy (RT) patients.

A total of 54 patients were enrolled (27 BABA RT and 27 OT). There were no significant differences between the 2 groups in clinicopathological characteristics and postoperative complication rates. Postoperative pain scores at days 1, 2, 3, and 14 were not significantly different between the groups for throat, anterior neck, posterior neck, or back. Postoperative analgesic requirements were similar between the 2 groups. Wound satisfaction scores were significantly higher in the BABA RT group (BABA RT 7.4 vs. OT 5.7; P = 0.016). Satisfaction scores for the usefulness of SRA were above 7.2 for all four questionnaire items on the 10-point scale.

Postoperative pain for BABA RT is equivalent to OT but offers greater cosmetic satisfaction for patients. A mobile device application such as SRA may facilitate proper assessment and management of pain in postoperative patients.

Eirik Årsand,  Taridzo Chomutare,  Naoe Tatara … (2012)
Self-management is critical to achieving diabetes treatment goals. Mobile phones and Bluetooth® can supportself-management and lifestyle changes for chronic diseases such as diabetes. A mobile health (mHealth) research platform--the Few Touch Application (FTA)--is a tool designed to support the self-management of diabetes. The FTA consists of a mobile phone-based diabetes diary, which can be updated both manually from user input and automatically by wireless data transfer, and which provides personalized decision support for the achievement of personal health goals. Studies and applications (apps) based on FTAs have included: (1) automatic transfer of blood glucose (BG) data; (2) short message service (SMS)-based education for type 1diabetes (T1DM); (3) a diabetes diary for type 2 diabetes (T2DM); (4) integrating a patient diabetes diary with health care (HC) providers; (5) a diabetes diary for T1DM; (6) a food picture diary for T1DM; (7) physical activity monitoring for T2DM; (8) nutrition information for T2DM; (9) context sensitivity in mobile self-help tools; and (10) modeling of BG using mobile phones. We have analyzed the performance of these 10 FTA-based apps to identify lessons for designing the most effective mHealth apps. From each of the 10 apps of FTA, respectively, we conclude: (1) automatic BG data transfer is easy to use and provides reassurance; (2) SMS-based education facilitates parent-child communication in T1DM; (3) the T2DM mobile phone diary encourages reflection; (4) the mobile phone diary enhances discussion between patients and HC professionals; (5) the T1DM mobile phone diary is useful and motivational; (6) the T1DM mobile phone picture diary is useful in identifying treatment obstacles; (7) the step counter with automatic data transfer promotes motivation and increases physical activity in T2DM; (8) food information on a phone for T2DM should not be at a detailed level; (9) context sensitivity has good prospects and is possible to implement on today's phones; and (10) BG modeling on mobile phones is promising for motivated T1DM users. We expect that the following elements will be important in future FTA designs: (A) automatic data transfer when possible; (B) motivational and visual user interfaces; (C) apps with considerable health benefits in relation to the effort required; (D) dynamic usage, e.g., both personal and together with HC personnel, long-/short-term perspective; and (E) inclusion of context sensitivity in apps. We conclude that mHealth apps will empower patients to take a more active role in managing their own health. © 2012 Diabetes Technology Society.

Ira Kim,  Young-Jin Soh,  Kuk Young Nah … (2010)
Robotic thyroidectomy using a gasless transaxillary approach, first described in 2008, has become popular. This study compared outcomes, including postoperative distress and patient satisfaction, for patients undergoing robotic thyroidectomy with those for patients treated by conventional open thyroidectomy. Of 84 prospectively enrolled patients, 41 underwent robotic thyroidectomy (the robot group), and 43 received conventional open thyroidectomy (the open group). All the patients were followed up for at least 3 months after surgery. Videolaryngostroboscopic examinations were performed preoperatively and after 1 week and after 3 months postoperatively. Postoperative pain and discomfort were evaluated using a symptom scale. Subjective voice and swallowing changes were assessed by questionnaires; and satisfaction with cosmetic outcome was measured by verbal response at 3 months. The two groups were similar in age, gender, type of operation, and final pathologic diagnosis. Although the mean operating time was significantly longer with the robotic technique than with open surgery, there were no between-group differences in postoperative pain or duration of hospital stay. No patient in either group experienced any major postoperative complication. Postoperative discomfort in the neck and swallowing disturbances were significantly more frequent in the open group than in the robot group, both at 1 week and at 3 months after surgery. However, there was no significant between-group difference in subjective voice parameters. At 3 months, the mean cosmetic satisfaction score was significantly higher in the robotic than in the open group. Although postoperative pain levels and complications were comparable in the two groups, conventional open thyroidectomy requires a shorter operative time. The robotic technique, however, offers several distinct advantages including very good to excellent cosmetic results, reduced postoperative neck discomfort, and fewer adverse swallowing symptoms.

Annals of Surgical Treatment and Research is an Open Access Journal. All articles are distributed under the terms of the Creative Commons Attribution Non-Commercial License ( http://creativecommons.org/licenses/by-nc/4.0/) which permits unrestricted non-commercial use, distribution, and reproduction in any medium, provided the original work is properly cited.