A mechanism-based classification of pain in multiple sclerosis 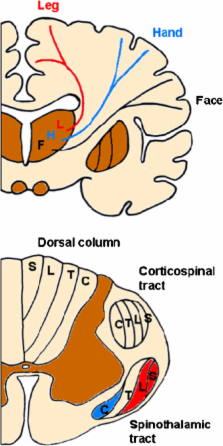 Neuropathic pain: redefinition and a grading system for clinical and research purposes.

Jordi Serra-Musach,  R Treede,  J Dostrovsky … (2008)
Pain usually results from activation of nociceptive afferents by actually or potentially tissue-damaging stimuli. Pain may also arise by activity generated within the nervous system without adequate stimulation of its peripheral sensory endings. For this type of pain, the International Association for the Study of Pain introduced the term neuropathic pain, defined as "pain initiated or caused by a primary lesion or dysfunction in the nervous system." While this definition has been useful in distinguishing some characteristics of neuropathic and nociceptive types of pain, it lacks defined boundaries. Since the sensitivity of the nociceptive system is modulated by its adequate activation (e.g., by central sensitization), it has been difficult to distinguish neuropathic dysfunction from physiologic neuroplasticity. We present a more precise definition developed by a group of experts from the neurologic and pain community: pain arising as a direct consequence of a lesion or disease affecting the somatosensory system. This revised definition fits into the nosology of neurologic disorders. The reference to the somatosensory system was derived from a wide range of neuropathic pain conditions ranging from painful neuropathy to central poststroke pain. Because of the lack of a specific diagnostic tool for neuropathic pain, a grading system of definite, probable, and possible neuropathic pain is proposed. The grade possible can only be regarded as a working hypothesis, which does not exclude but does not diagnose neuropathic pain. The grades probable and definite require confirmatory evidence from a neurologic examination. This grading system is proposed for clinical and research purposes.

EFNS guidelines on the pharmacological treatment of neuropathic pain: 2010 revision.

Troels Jensen,  Riccardo Baron,   … (2010)
This second European Federation of Neurological Societies Task Force aimed at updating the existing evidence about the pharmacological treatment of neuropathic pain since 2005. Studies were identified using the Cochrane Database and Medline. Trials were classified according to the aetiological condition. All class I and II randomized controlled trials (RCTs) were assessed; lower class studies were considered only in conditions that had no top-level studies. Treatments administered using repeated or single administrations were considered, provided they are feasible in an outpatient setting. Most large RCTs included patients with diabetic polyneuropathies and post-herpetic neuralgia, while an increasing number of smaller studies explored other conditions. Drugs generally have similar efficacy in various conditions, except in trigeminal neuralgia, chronic radiculopathy and HIV neuropathy, with level A evidence in support of tricyclic antidepressants (TCA), pregabalin, gabapentin, tramadol and opioids (in various conditions), duloxetine, venlafaxine, topical lidocaine and capsaicin patches (in restricted conditions). Combination therapy appears useful for TCA-gabapentin and gabapentin-opioids (level A). There are still too few large-scale comparative studies. For future trials, we recommend to assess comorbidities, quality of life, symptoms and signs with standardized tools and attempt to better define responder profiles to specific drug treatments.

Ralf Baron,  Giorgio Cruccu,  Jennifer Haythornthwaite … (2010)
This is a revision of guidelines, originally published in 2004, for the assessment of patients with neuropathic pain. Neuropathic pain is defined as pain arising as a direct consequence of a lesion or disease affecting the somatosensory system either at peripheral or central level. Screening questionnaires are suitable for identifying potential patients with neuropathic pain, but further validation of them is needed for epidemiological purposes. Clinical examination, including accurate sensory examination, is the basis of neuropathic pain diagnosis. For more accurate sensory profiling, quantitative sensory testing is recommended for selected cases in clinic, including the diagnosis of small fiber neuropathies and for research purposes. Measurement of trigeminal reflexes mediated by A-beta fibers can be used to differentiate symptomatic trigeminal neuralgia from classical trigeminal neuralgia. Measurement of laser-evoked potentials is useful for assessing function of the A-delta fiber pathways in patients with neuropathic pain. Functional brain imaging is not currently useful for individual patients in clinical practice, but is an interesting research tool. Skin biopsy to measure the intraepidermal nerve fiber density should be performed in patients with clinical signs of small fiber dysfunction. The intensity of pain and treatment effect (both in clinic and trials) should be assessed with numerical rating scale or visual analog scale. For future neuropathic pain trials, pain relief scales, patient and clinician global impression of change, the proportion of responders (50% and 30% pain relief), validated neuropathic pain quality measures and assessment of sleep, mood, functional capacity and quality of life are recommended. Copyright © 2010 International Association for the Study of Pain. Published by Elsevier B.V. All rights reserved.