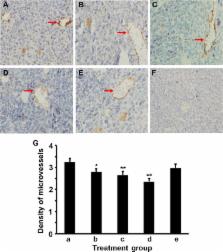 Luther Pollard,  Edwin Lewis (2006)
Macrophages are prominent in the stromal compartment of virtually all types of malignancy. These highly versatile cells respond to the presence of stimuli in different parts of tumors with the release of a distinct repertoire of growth factors, cytokines, chemokines, and enzymes that regulate tumor growth, angiogenesis, invasion, and/or metastasis. The distinct microenvironments where tumor-associated macrophages (TAM) act include areas of invasion where TAMs promote cancer cell motility, stromal and perivascular areas where TAMs promote metastasis, and avascular and perinecrotic areas where hypoxic TAMs stimulate angiogenesis. This review will discuss the evidence for differential regulation of TAMs in these microenvironments and provide an overview of current attempts to target or use TAMs for therapeutic purposes.

Mohammed A. Junaid,  Brian West,  N. Wadhwani … (2011)
Immune-regulated pathways influence multiple aspects of cancer development. In this article we demonstrate that both macrophage abundance and T-cell abundance in breast cancer represent prognostic indicators for recurrence-free and overall survival. We provide evidence that response to chemotherapy is in part regulated by these leukocytes; cytotoxic therapies induce mammary epithelial cells to produce monocyte/macrophage recruitment factors, including colony stimulating factor 1 (CSF1) and interleukin-34, which together enhance CSF1 receptor (CSF1R)-dependent macrophage infiltration. Blockade of macrophage recruitment with CSF1R-signaling antagonists, in combination with paclitaxel, improved survival of mammary tumor-bearing mice by slowing primary tumor development and reducing pulmonary metastasis. These improved aspects of mammary carcinogenesis were accompanied by decreased vessel density and appearance of antitumor immune programs fostering tumor suppression in a CD8+ T-cell-dependent manner. These data provide a rationale for targeting macrophage recruitment/response pathways, notably CSF1R, in combination with cytotoxic therapy, and identification of a breast cancer population likely to benefit from this novel therapeutic approach. These findings reveal that response to chemotherapy is in part regulated by the tumor immune microenvironment and that common cytotoxic drugs induce neoplastic cells to produce monocyte/macrophage recruitment factors, which in turn enhance macrophage infiltration into mammary adenocarcinomas. Blockade of pathways mediating macrophage recruitment, in combination with chemotherapy, significantly decreases primary tumor progression, reduces metastasis, and improves survival by CD8+ T-cell-dependent mechanisms, thus indicating that the immune microenvironment of tumors can be reprogrammed to instead foster antitumor immunity and improve response to cytotoxic therapy.

Alberto Mantovani,  Gianni Marone,  R Galdiero … (2013)
Tumor-associated macrophages (TAMs) are a key component of the tumor microenvironment and orchestrate various aspects of cancer. Diversity and plasticity are hallmarks of cells of the monocyte-macrophage lineage. In response to distinct signals macrophages undergo M1 (classical) or M2 (alternative) activation, which represent extremes of a continuum in a spectrum of activation states. Metabolic adaptation is a key component of macrophage plasticity and polarization, instrumental to their function in homeostasis, immunity and inflammation. Generally, TAMs acquire an M2-like phenotype that plays important roles in many aspects of tumor growth and progression. There is now evidence that also neutrophils can be driven towards distinct phenotypes in response to microenvironmental signals. The identification of mechanisms and molecules associated with macrophage and neutrophil plasticity and polarized activation provides a basis for new diagnostic and therapeutic strategies. Copyright © 2012 Wiley Periodicals, Inc.

*These two authors contributed equally to this study