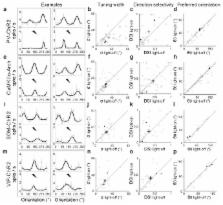 Inhibitory interneurons are essential components of the neural circuits underlying various brain functions. In the neocortex, a large diversity of GABAergic interneurons have been identified based on their morphology, molecular markers, biophysical properties, and innervation pattern 1, 2, 3 . However, how the activity of each subtype of interneurons contributes to sensory processing remains unclear. Here we show that optogenetic activation of parvalbumin-positive (PV+) interneurons in mouse V1 sharpens neuronal feature selectivity and improves perceptual discrimination. Using multichannel recording with silicon probes 4, 5 and channelrhodopsin 2 (ChR2)-mediated optical activation 6 , we found that elevated spiking of PV+ interneurons markedly sharpened orientation tuning and enhanced direction selectivity of nearby neurons. These effects were caused by the activation of inhibitory neurons rather than decreased spiking of excitatory neurons, since archaerhodopsin-3 (Arch)-mediated optical silencing 7 of calcium/calmodulin-dependent protein kinase IIα-positive (CaMKIIα+) excitatory neurons caused no significant change in V1 stimulus selectivity. Moreover, the improved selectivity specifically required PV+ neuron activation, since activating somatostatin (SOM+) or vasointestinal peptide (VIP+) interneurons had no significant effect. Notably, PV+ neuron activation in awake mice caused a significant improvement in their orientation discrimination, mirroring the sharpened V1 orientation tuning. Together, these results provide the first demonstration that visual coding and perception can be improved by elevated spiking of a specific subtype of cortical inhibitory interneurons.

Interneurons of the neocortical inhibitory system.

Maria Toledo,  Yun Wang,  Henry Markram … (2004)
Mammals adapt to a rapidly changing world because of the sophisticated cognitive functions that are supported by the neocortex. The neocortex, which forms almost 80% of the human brain, seems to have arisen from repeated duplication of a stereotypical microcircuit template with subtle specializations for different brain regions and species. The quest to unravel the blueprint of this template started more than a century ago and has revealed an immensely intricate design. The largest obstacle is the daunting variety of inhibitory interneurons that are found in the circuit. This review focuses on the organizing principles that govern the diversity of inhibitory interneurons and their circuits.

Petilla terminology: nomenclature of features of GABAergic interneurons of the cerebral cortex.

C. West,  Javier DeFelipe,  Gábor Tamás … (2008)
Neuroscience produces a vast amount of data from an enormous diversity of neurons. A neuronal classification system is essential to organize such data and the knowledge that is derived from them. Classification depends on the unequivocal identification of the features that distinguish one type of neuron from another. The problems inherent in this are particularly acute when studying cortical interneurons. To tackle this, we convened a representative group of researchers to agree on a set of terms to describe the anatomical, physiological and molecular features of GABAergic interneurons of the cerebral cortex. The resulting terminology might provide a stepping stone towards a future classification of these complex and heterogeneous cells. Consistent adoption will be important for the success of such an initiative, and we also encourage the active involvement of the broader scientific community in the dynamic evolution of this project.

Brian Chow,  Xue Han,  Allison S. Dobry … (2010)
The ability to silence the activity of genetically specified neurons in a temporally precise fashion would open up the ability to investigate the causal role of specific cell classes in neural computations, behaviors, and pathologies. Here we show that members of the class of light-driven outward proton pumps can mediate very powerful, safe, multiple-color silencing of neural activity. The gene archaerhodopsin-31 (Arch) from Halorubrum sodomense enables near-100% silencing of neurons in the awake brain when virally expressed in mouse cortex and illuminated with yellow light. Arch mediates currents of several hundred picoamps at low light powers, and supports neural silencing currents approaching 900 pA at light powers easily achievable in vivo. In addition, Arch spontaneously recovers from light-dependent inactivation, unlike light-driven chloride pumps that enter long-lasting inactive states in response to light. These properties of Arch are appropriate to mediate the optical silencing of significant brain volumes over behaviourally-relevant timescales. Arch function in neurons is well tolerated because pH excursions created by Arch illumination are minimized by self-limiting mechanisms to levels comparable to those mediated by channelrhodopsins2,3 or natural spike firing. To highlight how proton pump ecological and genomic diversity may support new innovation, we show that the blue-green light-drivable proton pump from the fungus Leptosphaeria maculans 4 (Mac) can, when expressed in neurons, enable neural silencing by blue light, thus enabling alongside other developed reagents the potential for independent silencing of two neural populations by blue vs. red light. Light-driven proton pumps thus represent a high-performance and extremely versatile class of “optogenetic” voltage and ion modulator, which will broadly empower new neuroscientific, biological, neurological, and psychiatric investigations.

[* ]To whom correspondence should be addressed. ydan@ 123456berkeley.edu