Understanding the role of neutrophils in chronic inflammatory airway disease 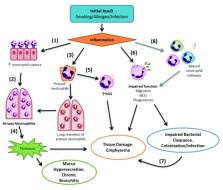 Airway neutrophilia is a common feature of many chronic inflammatory lung diseases and is associated with disease progression, often regardless of the initiating cause. Neutrophils and their products are thought to be key mediators of the inflammatory changes in the airways of patients with chronic obstructive pulmonary disease (COPD) and have been shown to cause many of the pathological features associated with disease, including emphysema and mucus hypersecretion. Patients with COPD also have high rates of bacterial colonisation and recurrent infective exacerbations, suggesting that neutrophil host defence mechanisms are impaired, a concept supported by studies showing alterations to neutrophil migration, degranulation and reactive oxygen species production in cells isolated from patients with COPD. Although the role of neutrophils is best described in COPD, many of the pathological features of this disease are not unique to COPD and also feature in other chronic inflammatory airway diseases, including asthma, cystic fibrosis, alpha-1 anti-trypsin deficiency, and bronchiectasis. There is increasing evidence for immune cell dysfunction contributing to inflammation in many of these diseases, focusing interest on the neutrophil as a key driver of pulmonary inflammation and a potential therapeutic target than spans diseases. This review discusses the evidence for neutrophilic involvement in COPD and also considers their roles in alpha-1 anti-trypsin deficiency, bronchiectasis, asthma, and cystic fibrosis. We provide an in-depth assessment of the role of the neutrophil in each of these conditions, exploring recent advances in understanding, and finally discussing the possibility of common mechanisms across diseases.