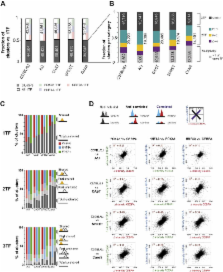 To mechanistically characterize the microevolutionary processes active in altering transcription factor (TF) binding among closely related mammals, we compared the genome-wide binding of three tissue-specific TFs that control liver gene expression in six rodents. Despite an overall fast turnover of TF binding locations between species, we identified thousands of TF regions of highly constrained TF binding intensity. Although individual mutations in bound sequence motifs can influence TF binding, most binding differences occur in the absence of nearby sequence variations. Instead, combinatorial binding was found to be significant for genetic and evolutionary stability; cobound TFs tend to disappear in concert and were sensitive to genetic knockout of partner TFs. The large, qualitative differences in genomic regions bound between closely related mammals, when contrasted with the smaller, quantitative TF binding differences among Drosophila species, illustrate how genome structure and population genetics together shape regulatory evolution. 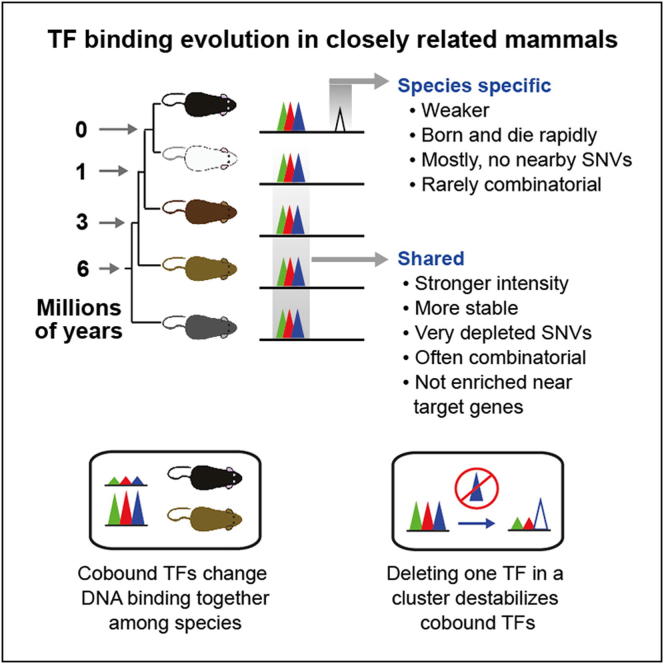 Alexander Stark,  Michael Lin,  Pouya Kheradpour … (2007)
Sequencing of multiple related species followed by comparative genomics analysis constitutes a powerful approach for the systematic understanding of any genome. Here, we use the genomes of 12 Drosophila species for the de novo discovery of functional elements in the fly. Each type of functional element shows characteristic patterns of change, or 'evolutionary signatures', dictated by its precise selective constraints. Such signatures enable recognition of new protein-coding genes and exons, spurious and incorrect gene annotations, and numerous unusual gene structures, including abundant stop-codon readthrough. Similarly, we predict non-protein-coding RNA genes and structures, and new microRNA (miRNA) genes. We provide evidence of miRNA processing and functionality from both hairpin arms and both DNA strands. We identify several classes of pre- and post-transcriptional regulatory motifs, and predict individual motif instances with high confidence. We also study how discovery power scales with the divergence and number of species compared, and we provide general guidelines for comparative studies.

Joel Rozowsky,  Michael Snyder,  Christopher Heffelfinger … (2010)
Differences in gene expression may play a major role in speciation and phenotypic diversity. We examined genome-wide differences in transcription factor (TF) binding in several humans and a single chimpanzee by using chromatin immunoprecipitation followed by sequencing. The binding sites of RNA polymerase II (PolII) and a key regulator of immune responses, nuclear factor kappaB (p65), were mapped in 10 lymphoblastoid cell lines, and 25 and 7.5% of the respective binding regions were found to differ between individuals. Binding differences were frequently associated with single-nucleotide polymorphisms and genomic structural variants, and these differences were often correlated with differences in gene expression, suggesting functional consequences of binding variation. Furthermore, comparing PolII binding between humans and chimpanzee suggests extensive divergence in TF binding. Our results indicate that many differences in individuals and species occur at the level of TF binding, and they provide insight into the genetic events responsible for these differences.

J. Suarez Gonzalez,  Hyun Sil Lee,  Natalie J. Ward … (2001)
The numerous functions of the liver are controlled primarily at the transcriptional level by the concerted actions of a limited number of hepatocyte-enriched transcription factors (hepatocyte nuclear factor 1alpha [HNF1alpha], -1beta, -3alpha, -3beta, -3gamma, -4alpha, and -6 and members of the c/ebp family). Of these, only HNF4alpha (nuclear receptor 2A1) and HNF1alpha appear to be correlated with the differentiated phenotype of cultured hepatoma cells. HNF1alpha-null mice are viable, indicating that this factor is not an absolute requirement for the formation of an active hepatic parenchyma. In contrast, HNF4alpha-null mice die during embryogenesis. Moreover, recent in vitro experiments using tetraploid aggregation suggest that HNF4alpha is indispensable for hepatocyte differentiation. However, the function of HNF4alpha in the maintenance of hepatocyte differentiation and function is less well understood. To address the function of HNF4alpha in the mature hepatocyte, a conditional gene knockout was produced using the Cre-loxP system. Mice lacking hepatic HNF4alpha expression accumulated lipid in the liver and exhibited greatly reduced serum cholesterol and triglyceride levels and increased serum bile acid concentrations. The observed phenotypes may be explained by (i) a selective disruption of very-low-density lipoprotein secretion due to decreased expression of genes encoding apolipoprotein B and microsomal triglyceride transfer protein, (ii) an increase in hepatic cholesterol uptake due to increased expression of the major high-density lipoprotein receptor, scavenger receptor BI, and (iii) a decrease in bile acid uptake to the liver due to down-regulation of the major basolateral bile acid transporters sodium taurocholate cotransporter protein and organic anion transporter protein 1. These data indicate that HNF4alpha is central to the maintenance of hepatocyte differentiation and is a major in vivo regulator of genes involved in the control of lipid homeostasis.

These authors contributed equally to this work and are listed alphabetically