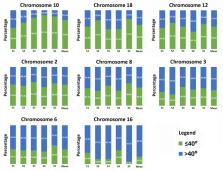 Background: Genomes are non-randomly organized within the interphase nucleus; and spermatozoa are proposed to have a unique hairpin-loop configuration, which has been hypothesized to be critical for the ordered exodus of the paternal genome following fertilization. Recent studies suggest that the hairpin-loop model of sperm chromatin organization is more segmentally organized. The purpose of this study is to examine the 3D organization and hairpin-loop configurations of chromosomes in human spermatozoa. Methods: Three-color sperm-fluorescence in-situ hybridization was utilized against the centromeres, and chromosome p- and q-arms of eight chromosomes from five normozoospermic donors. Wide-field fluorescence microscopy and 3D modelling established the radial organization and hairpin-loop chromosome configurations in spermatozoa. Results: All chromosomes possessed reproducible non-random radial organization ( p < 0.05) and formed discrete hairpin-loop configurations. However, chromosomes preferentially formed narrow or wide hairpin-loops. We did not find evidence to support the existence of a centralized chromocenter(s) with centromeres being more peripherally localized than one or both of their respective chromosome arms. Conclusion: This provides further evidence to support a more segmental organization of chromatin in the human sperm nucleus. This may be of significance for fertilization and early embryogenesis as specific genomic regions are likely to be exposed, remodeled, and activated first, following fertilization.

Thomas Cremer,  Marion Cremer (2010)
Chromosome territories (CTs) constitute a major feature of nuclear architecture. In a brief statement, the possible contribution of nuclear architecture studies to the field of epigenomics is considered, followed by a historical account of the CT concept and the final compelling experimental evidence of a territorial organization of chromosomes in all eukaryotes studied to date. Present knowledge of nonrandom CT arrangements, of the internal CT architecture, and of structural interactions with other CTs is provided as well as the dynamics of CT arrangements during cell cycle and postmitotic terminal differentiation. The article concludes with a discussion of open questions and new experimental strategies to answer them.

Ilya Flyamer,  Johanna Gassler,  Maxim Imakaev … (2017)
Chromatin is reprogrammed after fertilization to produce a totipotent zygote with the potential to generate a new organism 1 . The maternal genome inherited through the oocyte and the paternal genome provided by sperm coexist as separate haploid nuclei in the zygote. How these two epigenetically distinct genomes are spatially organized is poorly understood. Existing chromosome conformation capture-based methods 2–5 are inapplicable to oocytes and zygotes due to a paucity of material. To study the 3D chromatin organization in rare cell types, we developed a single-nucleus Hi-C (snHi-C) protocol that provides >10-fold more contacts per cell than the previous method 2 . Here we show that chromatin architecture is uniquely reorganized during the mouse oocyte-to-zygote transition and is distinct in paternal and maternal nuclei within single-cell zygotes. Features of genomic organization including compartments, topologically associating domains (TADs) and loops are present in individual oocytes when averaged over the genome; each feature at a locus is variable between cells. At the sub-megabase level, we observe stochastic clusters of contacts that violate TAD boundaries but average into TADs. Strikingly, we found that TADs and loops but not compartments are present in zygotic maternal chromatin, suggesting that these are generated by different mechanisms. Our results demonstrate that the global chromatin organization of zygote nuclei is fundamentally different from other interphase cells. An understanding of this zygotic chromatin “ground state” has the potential to provide insights into reprogramming to totipotency.