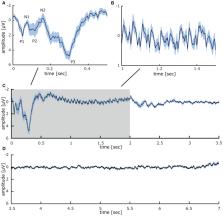 The induction of synaptic plasticity requires the presence of temporally patterned neural activity. Numerous cellular studies in animals and brain slices have demonstrated that long-term potentiation (LTP) enhances synaptic transmission, which can be evoked by high-frequency intermittent stimulation. In humans, plasticity processes underlying perceptual learning can be reliably induced by repetitive, LTP-like sensory stimulation. These protocols lead to improvement of perceptual abilities parallel to widespread remodeling of cortical processing. However, whether maintained rhythmic cortical activation induced by the LTP-like stimulation is also present during human perceptual learning experiments, remains elusive. To address this question, we here applied a 20 Hz intermittent stimulation protocol for 40 min to the index-, middle- and ring-fingers of the right hand, while continuously recording EEG over the hand representation in primary somatosensory cortex in young adult participants. We find that each train of stimulation initiates a transient series of sensory-evoked potentials which accumulate after about 500 ms into a 20 Hz steady-state response persisting over the entire period of the 2-s-train. During the inter-train interval, no consistent evoked activity can be detected. This response behavior is maintained over the whole 40 min of stimulation without any indication of habituation. However, the early stimulation evoked potentials (SEPs) and the event-related desynchronization (ERD) during the steady-state response change over the 40 min of stimulation. In a second experiment, we demonstrate in a separate cohort of participants that the here-applied pneumatic type of stimulation results in improvement of tactile acuity as typically observed for electrically applied 20 Hz intermittent stimulation. Our data demonstrate that repetitive stimulation using a 20 Hz protocol drives rhythmic activation in the hand representation of somatosensory cortex, which is sustained during the entire stimulation period. At the same time, cortical excitability increases as indicated by altered ERD and SEP amplitudes. Our results, together with previous data underlining the dependence of repetitive sensory stimulation effects on NMDA-receptor activation, support the view that repetitive sensory stimulation elicits LTP-like processes in the cortex, thereby facilitating perceptual learning processes.

M A Lynch (2004)
One of the most significant challenges in neuroscience is to identify the cellular and molecular processes that underlie learning and memory formation. The past decade has seen remarkable progress in understanding changes that accompany certain forms of acquisition and recall, particularly those forms which require activation of afferent pathways in the hippocampus. This progress can be attributed to a number of factors including well-characterized animal models, well-defined probes for analysis of cell signaling events and changes in gene transcription, and technology which has allowed gene knockout and overexpression in cells and animals. Of the several animal models used in identifying the changes which accompany plasticity in synaptic connections, long-term potentiation (LTP) has received most attention, and although it is not yet clear whether the changes that underlie maintenance of LTP also underlie memory consolidation, significant advances have been made in understanding cell signaling events that contribute to this form of synaptic plasticity. In this review, emphasis is focused on analysis of changes that occur after learning, especially spatial learning, and LTP and the value of assessing these changes in parallel is discussed. The effect of different stressors on spatial learning/memory and LTP is emphasized, and the review concludes with a brief analysis of the contribution of studies, in which transgenic animals were used, to the literature on memory/learning and LTP.

Coding and use of tactile signals from the fingertips in object manipulation tasks.

J. Randall Flanagan,  Trintje Johansson (2009)
During object manipulation tasks, the brain selects and implements action-phase controllers that use sensory predictions and afferent signals to tailor motor output to the physical properties of the objects involved. Analysis of signals in tactile afferent neurons and central processes in humans reveals how contact events are encoded and used to monitor and update task performance.

Robert Malenka,  Christian Lüscher (2012)
Long-term potentiation and long-term depression (LTP/LTD) can be elicited by activating N-methyl-d-aspartate (NMDA)-type glutamate receptors, typically by the coincident activity of pre- and postsynaptic neurons. The early phases of expression are mediated by a redistribution of AMPA-type glutamate receptors: More receptors are added to potentiate the synapse or receptors are removed to weaken synapses. With time, structural changes become apparent, which in general require the synthesis of new proteins. The investigation of the molecular and cellular mechanisms underlying these forms of synaptic plasticity has received much attention, because NMDA receptor-dependent LTP and LTD may constitute cellular substrates of learning and memory.

This article was submitted to Brain Imaging and Stimulation, a section of the journal Frontiers in Human Neuroscience