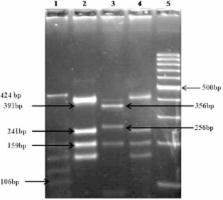 Diarrhoea is the main clinical manifestation caused by intestinal parasitic infections in patients, with special reference to transplant recipients who require careful consideration to reduce morbidity and mortality. Further, molecular characterization of some important parasites is necessary to delineate the different modes of transmission to consider appropriate management strategies. We undertook this study to investigate the intestinal parasitic infections in transplant recipients with or without diarrhoea, and the genotypes of the isolated parasites were also determined.

The parasites that were detected included Cryptosporidium species (21%, 8/38), Cystoisospora ( Isospora) belli (8%, 3), Cyclospora cayetanensis (5%, 2), G. lamblia (11%, 4), Hymenolepis nana (11%, 4), Strongyloides stercoralis (3%, 1) and Blastocystis hominis (3%, 1). Multilocus genotyping of Cryptosporidium species at SSUrRNA, COWP and DHFR loci could detect four isolates of C. hominis; two of C. parvum, one of mixed genotype and one could not be genotyped. All the C. hominis isolates were detected in adult post-renal transplant (PRT) recipients, whereas the C. parvum isolates included a child with BMT and an adult with PRT. Clostridium difficle, cytomegalovirus and Candida albicans were found in 2, 3 and 2 patients, respectively.

In the present study, C. hominis was observed as an important parasite causing intestinal infections in transplant recipients. Multilocus genotyping of Cryptosporidium species could detect four isolates of C. hominis; two of C. parvum, one of mixed genotype and one could not be genotyped. Genotyping of G. lamblia revealed that assemblage B was most common.

Roy Arrowood,  W Shulaw,  Lihua Xiao … (1999)
To assess the genetic diversity in Cryptosporidium parvum, we have sequenced the small subunit (SSU) rRNA gene of seven Cryptosporidium spp., various isolates of C. parvum from eight hosts, and a Cryptosporidium isolate from a desert monitor. Phylogenetic analysis of the SSU rRNA sequences confirmed the multispecies nature of the genus Cryptosporidium, with at least four distinct species (C. parvum, C. baileyi, C. muris, and C. serpentis). Other species previously defined by biologic characteristics, including C. wrairi, C. meleagridis, and C. felis, and the desert monitor isolate, clustered together or within C. parvum. Extensive genetic diversities were present among C. parvum isolates from humans, calves, pigs, dogs, mice, ferrets, marsupials, and a monkey. In general, specific genotypes were associated with specific host species. A PCR-restriction fragment length polymorphism technique previously developed by us could differentiate most Cryptosporidium spp. and C. parvum genotypes, but sequence analysis of the PCR product was needed to differentiate C. wrairi and C. meleagridis from some of the C. parvum genotypes. These results indicate a need for revision in the taxonomy and assessment of the zoonotic potential of some animal C. parvum isolates.

Epidemiology and clinical features of Cryptosporidium infection in immunocompromised patients.

Gordon Nichols,  Craig P. Hunter (2001)
Cryptosporidium spp. are a major cause of diarrheal disease in both immunocompetent and immunodeficient individuals. They also cause waterborne disease in both the United States and United Kingdom. Studies on the mechanisms of immunity to cryptosporidiosis indicate the importance of the T-cell response. The spectrum and severity of disease in immunocompromised individuals with cryptosporidiosis reflect this importance since the most severe disease is seen in individuals with defects in the T-cell response. The most commonly studied group is that of patients with AIDS. These patients suffer from more severe and prolonged gastrointestinal disease that can be fatal; in addition, body systems other than the gastrointestinal tract may be affected. The widespread use of antiretroviral therapy does appear to be having a beneficial effect on recovery from cryptosporidiosis and on the frequency of infection in human immunodeficiency virus-positive patients. Other diseases that are associated with increased risk of severe cryptosporidiosis, such as primary immunodeficiencies, most notably severe combined immunodeficiency syndrome, are also predominantly associated with T-cell defects. Of the remaining groups, children with acute leukemia seem to be most at risk from cryptosporidiosis. There is less evidence of severe complications in patients with other malignant diseases or in those receiving immunosuppressive chemotherapy.

A Crisanti,  F. Spanò,  D Casemore … (1997)
Cryptosporidium wrairi was isolated from guinea pigs during a spontaneous outbreak of cryptosporidiosis. Despite the morphological and antigenic similarities to C. parvum, C. wrairi displayed a different host range and site of infection and may represent a separate species or sub-species. We used the polymerase chain reaction to clone two distinct 550 bp-long DNA fragments, Wc-I and Wc-II, of the gene encoding the Cryptosporidium oocyst wall protein (COWP) of C. wrairi, which showed 98% identity to the C. parvum homologue. Within Wc-I, polymorphic Rsal restriction sites were used to develop a polymerase chain reaction-restriction fragment length polymorphism method able to distinguish C. wrairi from C. parvum and to identify two groups of C. parvum isolates differentially associated with animal and human infections.