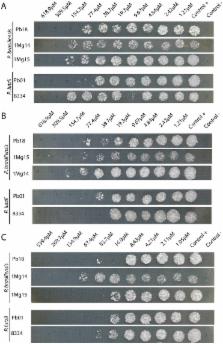 The prevalence of invasive fungal infections worldwide has increased in the last decades. The development of specific drugs targeting pathogenic fungi without producing collateral damage to mammalian cells is a daunting pharmacological challenge. Indeed, many of the toxicities and drug interactions observed with contemporary antifungal therapies can be attributed to “nonselective” interactions with enzymes or cell membrane systems found in mammalian host cells. A computer-aided screening strategy against the TRR1 protein of Paracoccidioides lutzii is presented here. Initially, a bank of commercially available compounds from Life Chemicals provider was docked to model by virtual screening simulations. The small molecules that interact with the model were ranked and, among the best hits, twelve compounds out of 3,000 commercially-available candidates were selected. These molecules were synthesized for validation and in vitro antifungal activity assays for Paracoccidioides lutzii and P. brasiliensis were performed. From 12 molecules tested, 3 harbor inhibitory activity in antifungal assays against the two pathogenic fungi. Corroborating these findings, the molecules have inhibitory activity against the purified recombinant enzyme TRR1 in biochemical assays. Therefore, a rational combination of molecular modeling simulations and virtual screening of new drugs has provided a cost-effective solution to an early-stage medicinal challenge. These results provide a promising technique to the development of new and innovative drugs.

LIGPLOT: a program to generate schematic diagrams of protein-ligand interactions.

J Thornton,  B. A. Wallace,  Edward Laskowski (1995)
The LIGPLOT program automatically generates schematic 2-D representations of protein-ligand complexes from standard Protein Data Bank file input. The output is a colour, or black-and-white, PostScript file giving a simple and informative representation of the intermolecular interactions and their strengths, including hydrogen bonds, hydrophobic interactions and atom accessibilities. The program is completely general for any ligand and can also be used to show other types of interaction in proteins and nucleic acids. It was designed to facilitate the rapid inspection of many enzyme complexes, but has found many other applications.

E S J Arnér,  Robert Holmgren (2000)
Thioredoxin, thioredoxin reductase and NADPH, the thioredoxin system, is ubiquitous from Archea to man. Thioredoxins, with a dithiol/disulfide active site (CGPC) are the major cellular protein disulfide reductases; they therefore also serve as electron donors for enzymes such as ribonucleotide reductases, thioredoxin peroxidases (peroxiredoxins) and methionine sulfoxide reductases. Glutaredoxins catalyze glutathione-disulfide oxidoreductions overlapping the functions of thioredoxins and using electrons from NADPH via glutathione reductase. Thioredoxin isoforms are present in most organisms and mitochondria have a separate thioredoxin system. Plants have chloroplast thioredoxins, which via ferredoxin-thioredoxin reductase regulates photosynthetic enzymes by light. Thioredoxins are critical for redox regulation of protein function and signaling via thiol redox control. A growing number of transcription factors including NF-kappaB or the Ref-1-dependent AP1 require thioredoxin reduction for DNA binding. The cytosolic mammalian thioredoxin, lack of which is embryonically lethal, has numerous functions in defense against oxidative stress, control of growth and apoptosis, but is also secreted and has co-cytokine and chemokine activities. Thioredoxin reductase is a specific dimeric 70-kDa flavoprotein in bacteria, fungi and plants with a redox active site disulfide/dithiol. In contrast, thioredoxin reductases of higher eukaryotes are larger (112-130 kDa), selenium-dependent dimeric flavoproteins with a broad substrate specificity that also reduce nondisulfide substrates such as hydroperoxides, vitamin C or selenite. All mammalian thioredoxin reductase isozymes are homologous to glutathione reductase and contain a conserved C-terminal elongation with a cysteine-selenocysteine sequence forming a redox-active selenenylsulfide/selenolthiol active site and are inhibited by goldthioglucose (aurothioglucose) and other clinically used drugs.

The funding was supported by CNPq (Conselho Nacional de Desenvolvimento Científico e Tecnológico) ( http://www.cnpq.br/) and FAP-DF (Fundação de Apoio a Pesquisa do Distrito Federal) ( http://www.fap.df.gov.br/). The funders had no role in study design, data collection and analysis, decision to publish, or preparation of the manuscript.