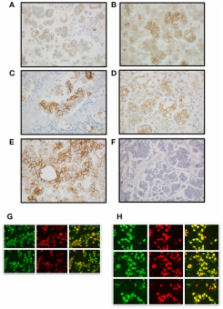 Ovarian cancer is the most lethal gynecologic malignancy, with the majority of patients dying within 5 years of diagnosis. This poor survival of patients diagnosed with this malignancy is attributed to diagnosis at advanced stage, when the tumor has metastasized, and to chemotherapy resistance, either primary or developing along tumor progression. However, ovarian carcinomas, constituting the vast majority of ovarian cancers, additionally have unique biology, one aspect of which is the ability to co-express epithelial and mesenchymal determinants. epithelial–mesenchymal transition (EMT), a physiological process by which mesenchymal cells are formed and migrate to target organs during embryogenesis, is involved in cancer cell invasion and metastasis. However, these changes do not fully occur in ovarian carcinoma, and are even reversed in tumor cells present in malignant peritoneal and pleural effusions. This review summarizes current knowledge in this area, including the characteristics of EMT related to adhesion, transcriptional regulation and chemoresistance, and their clinical relevance, as well as the recently observed regulation of EMT by microRNA.

Cell adhesion and signalling by cadherins and Ig-CAMs in cancer.

Inflammation and EMT: an alliance towards organ fibrosis and cancer progression

José Miguel López-Novoa,  M. Angela Nieto (2009)
Recent advances in our understanding of the molecular pathways that govern the association of inflammation with organ fibrosis and cancer point to the epithelial to mesenchymal transition (EMT) as the common link in the progression of these devastating diseases. The EMT is a crucial process in the development of different tissues in the embryo and its reactivation in the adult may be regarded as a physiological attempt to control inflammatory responses and to ‘heal’ damaged tissue. However, in pathological contexts such as in tumours or during the development of organ fibrosis, this healing response adopts a sinister nature, steering these diseases towards metastasis and organ failure. Importantly, the chronic inflammatory microenvironment common to fibrotic and cancer cells emerges as a decisive factor in the induction of the pathological EMT.