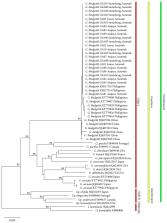 Gracilaria red algae are notable for their economic importance as agrophytes, sold as salad vegetable, and used as the base for selected food and nonalcoholic beverages. A wild population of Gracilaria exists in coastal areas of Sarawak, Malaysian Borneo, but there is only limited knowledge on species diversity and its abundance leaving the untapped economic potential of this resource. This study was carried out to determine diversity of wild Gracilaria populations in Lawas, Santubong, and Asajaya, Sarawak, using the combination of morphological character examination and 5′ region of the mitochondrial cytochrome c oxidase 1 (CO1-5P) gene analysis. Identification of the species using morphological characters revealed three species, namely, Gracilaria changii, G. blodgettii, and G. arcuata, had been collected from the sampling sites. However, based on 672 bp CO1-5P gene sequence analysis, all the three species were identified as G. blodgettii; besides, low genetic divergence values (0.17%–0.34%) were scored between samples in this study with the same species in GenBank. In the phylogenetic trees, all samples in this study group together with other G. blodgettii have high bootstrap values; thus, this species is monophyletic. This study implies that species identification of Gracilaria and other seagrass taxa which have a phenotypic plasticity problem should include the CO1-5P gene analysis as it is a reliable gene marker for species diversity assessment.

G Saunders (2005)
Marine macroalgae, especially the Rhodophyta, can be notoriously difficult to identify owing to their relatively simple morphology and anatomy, convergence, rampant phenotypic plasticity, and alternation of heteromorphic generations. It is thus not surprising that algal systematists have come to rely heavily on genetic tools for molecular assisted alpha taxonomy. Unfortunately the number of suitable marker systems in the three available genomes is enormous and, although most workers have settled on one of three or four models, the lack of an accepted standard hinders the comparison of results between laboratories. The advantages of a standard system are obvious for practical purposes of species discovery and identification; as well, compliance with a universal marker, such as cox1 being developed under the label 'DNA barcode', would allow algal systematists to benefit from the rapidly emerging technologies. Novel primers were developed for red algae to PCR amplify and sequence the 5' cox1 'barcode' region and were used to assess three known species-complex questions: (i) Mazzaella species in the Northeast Pacific; (ii) species of the genera Dilsea and Neodilsea in the Northeast Pacific; and (iii) Asteromenia peltata from three oceans. These models were selected because they have all caused confusion with regards to species number, distribution, and identification in the field, and because they have all been studied with molecular tools. In all cases the DNA barcode resolved accurately and unequivocally species identities and, with the enhanced sampling here, turned up a variety of novel observations in need of further taxonomic investigation.

DNA BARCODING IS A POWERFUL TOOL TO UNCOVER ALGAL DIVERSITY: A CASE STUDY OF THE PHYLLOPHORACEAE (GIGARTINALES, RHODOPHYTA) IN THE CANADIAN FLORA