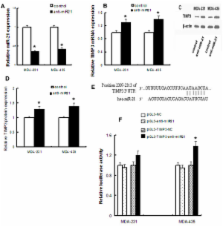 MicroRNAs are non-coding RNA molecules that posttranscriptionally regulate expression of target genes and have been implicated in the progress of cancer proliferation, differentiation and apoptosis. The aim of this study was to determine whether microRNA-21 (miR-21), a specific microRNA implicated in multiple aspects of carcinogenesis, impacts breast cancer invasion by regulating the tissue inhibitor of metalloproteinase 3 (TIMP3) gene.

miR-21 expression was investigated in 32 matched breast cancer and normal breast tissues, and in four human breast cancer cell lines, by Taqman quantitative real-time PCR. Cell invasive ability was determined by matrigel invasion assay in vitro, in cells transfected with miR-21 or anti-miR-21 oligonucleotides. In addition, the regulation of tissue inhibitor of metalloproteinase 3 (TIMP3) by miR-21 was evaluated by western blotting and luciferase assays.

As knockdown of miR-21 increased TIMP3 protein expression and luciferase reporter activity, our data suggests that miR-21 could promote invasion in breast cancer cells via its regulation of TIMP3.

Oncomirs - microRNAs with a role in cancer.

Aurora Esquela-Kerscher,  Frank J Slack (2006)
MicroRNAs (miRNAs) are an abundant class of small non-protein-coding RNAs that function as negative gene regulators. They regulate diverse biological processes, and bioinformatic data indicates that each miRNA can control hundreds of gene targets, underscoring the potential influence of miRNAs on almost every genetic pathway. Recent evidence has shown that miRNA mutations or mis-expression correlate with various human cancers and indicates that miRNAs can function as tumour suppressors and oncogenes. miRNAs have been shown to repress the expression of important cancer-related genes and might prove useful in the diagnosis and treatment of cancer.

Caifu Chen,  Dana A Ridzon,  Adam J. Broomer … (2005)
A novel microRNA (miRNA) quantification method has been developed using stem–loop RT followed by TaqMan PCR analysis. Stem–loop RT primers are better than conventional ones in terms of RT efficiency and specificity. TaqMan miRNA assays are specific for mature miRNAs and discriminate among related miRNAs that differ by as little as one nucleotide. Furthermore, they are not affected by genomic DNA contamination. Precise quantification is achieved routinely with as little as 25 pg of total RNA for most miRNAs. In fact, the high sensitivity, specificity and precision of this method allows for direct analysis of a single cell without nucleic acid purification. Like standard TaqMan gene expression assays, TaqMan miRNA assays exhibit a dynamic range of seven orders of magnitude. Quantification of five miRNAs in seven mouse tissues showed variation from less than 10 to more than 30 000 copies per cell. This method enables fast, accurate and sensitive miRNA expression profiling and can identify and monitor potential biomarkers specific to tissues or diseases. Stem–loop RT–PCR can be used for the quantification of other small RNA molecules such as short interfering RNAs (siRNAs). Furthermore, the concept of stem–loop RT primer design could be applied in small RNA cloning and multiplex assays for better specificity and efficiency.