Current and Projected Heat-Related Morbidity and Mortality in Rhode Island 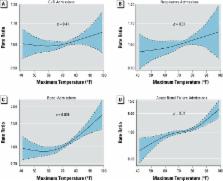 Climate change is expected to cause increases in heat-related mortality, especially among the elderly and very young. However, additional studies are needed to clarify the effects of heat on morbidity across all age groups and across a wider range of temperatures.

We aimed to estimate the impact of current and projected future temperatures on morbidity and mortality in Rhode Island.

We used Poisson regression models to estimate the association between daily maximum temperature and rates of all-cause and heat-related emergency department (ED) admissions and all-cause mortality. We then used downscaled Coupled Model Intercomparison Project Phase 5 (CMIP5; a standardized set of climate change model simulations) projections to estimate the excess morbidity and mortality that would be observed if this population were exposed to the temperatures projected for 2046–2053 and 2092–2099 under two representative concentration pathways (RCP): RCP 8.5 and 4.5.

With all other factors held constant, our findings suggest that the current population of Rhode Island would experience substantially higher morbidity and mortality if maximum daily temperatures increase further as projected.

R: A Language and environmental for statistical computing

G Anderson,  Michelle L. Bell (2010)
Background Devastating health effects from recent heat waves, and projected increases in frequency, duration, and severity of heat waves from climate change, highlight the importance of understanding health consequences of heat waves. Objectives We analyzed mortality risk for heat waves in 43 U.S. cities (1987–2005) and investigated how effects relate to heat waves’ intensity, duration, or timing in season. Methods Heat waves were defined as ≥ 2 days with temperature ≥ 95th percentile for the community for 1 May through 30 September. Heat waves were characterized by their intensity, duration, and timing in season. Within each community, we estimated mortality risk during each heat wave compared with non-heat wave days, controlling for potential confounders. We combined individual heat wave effect estimates using Bayesian hierarchical modeling to generate overall effects at the community, regional, and national levels. We estimated how heat wave mortality effects were modified by heat wave characteristics (intensity, duration, timing in season). Results Nationally, mortality increased 3.74% [95% posterior interval (PI), 2.29–5.22%] during heat waves compared with non-heat wave days. Heat wave mortality risk increased 2.49% for every 1°F increase in heat wave intensity and 0.38% for every 1-day increase in heat wave duration. Mortality increased 5.04% (95% PI, 3.06–7.06%) during the first heat wave of the summer versus 2.65% (95% PI, 1.14–4.18%) during later heat waves, compared with non-heat wave days. Heat wave mortality impacts and effect modification by heat wave characteristics were more pronounced in the Northeast and Midwest compared with the South. Conclusions We found higher mortality risk from heat waves that were more intense or longer, or those occurring earlier in summer. These findings have implications for decision makers and researchers estimating health effects from climate change.

George Luber,  Michael A. McGeehin (2008)
The association between climate change and the frequency and intensity of extreme heat events is now well established. General circulation models of climate change predict that heatwaves will become more frequent and intense, especially in the higher latitudes, affecting large metropolitan areas that are not well adapted to them. Exposure to extreme heat is already a significant public health problem and the primary cause of weather-related mortality in the U.S. This article reviews major epidemiologic risk factors associated with mortality from extreme heat exposure and discusses future drivers of heat-related mortality, including a warming climate, the urban heat island effect, and an aging population. In addition, it considers critical areas of an effective public health response including heat response plans, the use of remote sensing and GIS methodologies, and the importance of effective communications strategies.

Publication of EHP lies in the public domain and is therefore without copyright. All text from EHP may be reprinted freely. Use of materials published in EHP should be acknowledged (for example, “Reproduced with permission from Environmental Health Perspectives”); pertinent reference information should be provided for the article from which the material was reproduced. Articles from EHP, especially the News section, may contain photographs or illustrations copyrighted by other commercial organizations or individuals that may not be used without obtaining prior approval from the holder of the copyright.