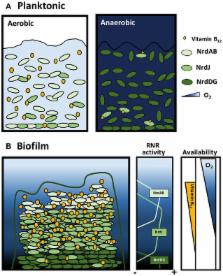 Pseudomonas aeruginosa is a major pathogenic bacterium in chronic infections and is a model organism for studying biofilms. P. aeruginosa is considered an aerobic bacterium, but in the presence of nitrate, it also grows in anaerobic conditions. Oxygen diffusion through the biofilm generates metabolic and genetic diversity in P. aeruginosa growth, such as in ribonucleotide reductase activity. These essential enzymes are necessary for DNA synthesis and repair. Oxygen availability determines the activity of the three-ribonucleotide reductase (RNR) classes. Class II and III RNRs are active in the absence of oxygen; however, class II RNRs, which are important in P. aeruginosa biofilm growth, require a vitamin B 12 cofactor for their enzymatic activity. In this work, we elucidated the conditions in which class II RNRs are active due to vitamin B 12 concentration constraints (biosynthesis or environmental availability). We demonstrated that increased vitamin B 12 levels during aerobic, stationary and biofilm growth activate class II RNR activity. We also established that the cobN gene is essentially responsible for B 12 biosynthesis under planktonic and biofilm growth. Our results unravel the mechanisms of dNTP synthesis by P. aeruginosa during biofilm growth, which appear to depend on the bacterial strain (laboratory-type or clinical isolate).

Philip Stewart,  Michael J Franklin (2008)
Biofilms contain bacterial cells that are in a wide range of physiological states. Within a biofilm population, cells with diverse genotypes and phenotypes that express distinct metabolic pathways, stress responses and other specific biological activities are juxtaposed. The mechanisms that contribute to this genetic and physiological heterogeneity include microscale chemical gradients, adaptation to local environmental conditions, stochastic gene expression and the genotypic variation that occurs through mutation and selection. Here, we discuss the processes that generate chemical gradients in biofilms, the genetic and physiological responses of the bacteria as they adapt to these gradients and the techniques that can be used to visualize and measure the microscale physiological heterogeneities of bacteria in biofilms.

Quantification of biofilm structures by the novel computer program COMSTAT.

A Bobik,  Bradley Roth,  Rebecca J. Lawrence (1995)
This review examines deoxyadenosylcobalamin (Ado-B12) biosynthesis, transport, use, and uneven distribution among living forms. We describe how genetic analysis of enteric bacteria has contributed to these issues. Two pathways for corrin ring formation have been found-an aerobic pathway (in P. denitrificans) and an anaerobic pathway (in P. shermanii and S. typhimurium)-that differ in the point of cobalt insertion. Analysis of B12 transport in E. coli reveals two systems: one (with two proteins) for the outer membrane, and one (with three proteins) for the inner membrane. To account for the uneven distribution of B12 in living forms, we suggest that the B12 synthetic pathway may have evolved to allow anaerobic fermentation of small molecules in the absence of an external electron acceptor. Later, evolution of the pathway produced siroheme, (allowing use of inorganic electron acceptors), chlorophyll (O2 production), and heme (aerobic respiration). As oxygen became a larger part of the atmosphere, many organisms lost fermentative functions and retained dependence on newer, B12 functions that did not involve fermentation. Paradoxically, Salmonella spp. synthesize B12 only anaerobically but can use B12 (for degradation of ethanolamine and propanediol) only with oxygen. Genetic analysis of the operons for these degradative functions indicate that anaerobic degradation is important. Recent results suggest that B12 can be synthesized and used during anaerobic respiration using tetrathionate (but not nitrate or fumarate) as an electron acceptor. The branch of enteric taxa from which Salmonella spp. and E. coli evolved appears to have lost the ability to synthesize B12 and the ability to use it in propanediol and glycerol degradation. Salmonella spp., but not E. coli, have acquired by horizontal transfer the ability to synthesize B12 and degrade propanediol. The acquired ability to degrade propanediol provides the selective force that maintains B12 synthesis in this group.