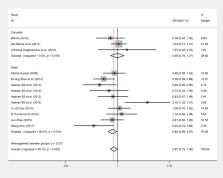 Resistance to valproic acid (VPA), a first-line antiepileptic drug (AED), is occurring at an alarming rate, particularly in children. Signal nucleotide polymorphisms are considered crucial in this process. Therefore, we investigated whether the SCN1A polymorphism rs3812718 could be associated with VPA resistance. A total of 231 children with epilepsy who were solely administered VPA were enrolled. DNA was extracted from the peripheral blood samples and was genotyped by the Mass Array method. Furthermore, a meta-analysis was conducted between the drug responsive and resistant patients who were exposed to voltage-gated sodium channels. Results revealed that the TT genotype was associated with a higher risk of developing drug resistance (OR = 2.636, 95% CI 1.08–6.433, P = 0.033). After adjusting for the risk factors, a significant difference was still observed between the responsive and resistant groups (OR = 2.861, 95% CI 1.141–7.174, P = 0.025). Moreover, the recessive model was associated with a decreased drug resistance (OR = 0.402, 95% CI 0.167–0.968, P = 0.042) after correcting the risk factors. Meta-analysis of nine studies revealed similar results. In conclusion, our results proved that the rs3812718 TT genotype was associated with a high risk of developing drug resistance, and the recessive model could decrease the risk of VPA resistance.

Pharmacological and therapeutic properties of valproate: a summary after 35 years of clinical experience.

Emilio Perucca (2001)
Thirty-five years since its introduction into clinical use, valproate (valproic acid) has become the most widely prescribed antiepileptic drug (AED) worldwide. Its pharmacological effects involve a variety of mechanisms, including increased gamma-aminobutyric acid (GABA)-ergic transmission, reduced release and/or effects of excitatory amino acids, blockade of voltage-gated sodium channels and modulation of dopaminergic and serotoninergic transmission. Valproate is available in different dosage forms for parenteral and oral use. All available oral formulations are almost completely bioavailable, but they differ in dissolution characteristics and absorption rates. In particular, sustained-release formulations are available that minimise fluctuations in serum drug concentrations during a dosing interval and can therefore be given once or twice daily. Valproic acid is about 90% bound to plasma proteins, and the degree of binding decreases with increasing drug concentration within the clinically occurring range. Valproic acid is extensively metabolised by microsomal glucuronide conjugation, mitochondrial beta-oxidation and cytochrome P450-dependent omega-, (omega-1)- and (omega-2)-oxidation. The elimination half-life is in the order of 9 to 18 hours, but shorter values (5 to 12 hours) are observed in patients comedicated with enzyme-inducing agents such as phenytoin, carbamazepine and barbiturates. Valproate itself is devoid of enzyme-inducing properties, but it has the potential of inhibiting drug metabolism and can increase by this mechanism the plasma concentrations of certain coadministered drugs, including phenobarbital (phenobarbitone), lamotrigine and zidovudine. Valproate is a broad spectrum AED, being effective against all seizure types. In patients with newly diagnosed partial seizures (with or without secondary generalisation) and/or primarily generalised tonic-clonic seizures, the efficacy of valproate is comparable to that of phenytoin, carbamazepine and phenobarbital, although in most comparative trials the tolerability of phenobarbital was inferior to that of the other drugs. Valproate is generally regarded as a first-choice agent for most forms of idiopathic and symptomatic generalised epilepsies. Many of these syndromes are associated with multiple seizure types, including tonic-clonic, myoclonic and absence seizures, and prescription of a broad-spectrum drug such as valproate has clear advantages in this situation. A number of reports have also suggested that intravenous valproate could be of value in the treatment of convulsive and nonconvulsive status epilepticus, but further studies are required to establish in more detail the role of the drug in this indication. The most commonly reported adverse effects of valproate include gastrointestinal disturbances, tremor and bodyweight gain. Other notable adverse effects include encephalopathy symptoms (at times associated with hyperammonaemia), platelet disorders, pancreatitis, liver toxicity (with an overall incidence of 1 in 20,000, but a frequency as high as 1 in 600 or 1 in 800 in high-risk groups such as infants below 2 years of age receiving anticonvulsant polytherapy) and teratogenicity, including a 1 to 3% risk of neural tube defects. Some studies have also suggested that menstrual disorders and certain clinical, ultrasound or endocrine manifestations of reproductive system disorders, including polycystic ovary syndrome, may be more common in women treated with valproate than in those treated with other AEDs. However, the precise relevance of the latter findings remains to be evaluated in large, prospective, randomised studies.

Genetic predictors of the maximum doses patients receive during clinical use of the anti-epileptic drugs carbamazepine and phenytoin.

Arjune Sen,  Gianpiero L. Cavalleri,  Sanjay Sisodiya … (2005)
Phenytoin and carbamazepine are effective and inexpensive anti-epileptic drugs (AEDs). As with many AEDs, a broad range of doses is used, with the final "maintenance" dose normally determined by trial and error. Although many genes could influence response to these medicines, there are obvious candidates. Both drugs target the alpha-subunit of the sodium channel, encoded by the SCN family of genes. Phenytoin is principally metabolized by CYP2C9, and both are probable substrates of the drug transporter P-glycoprotein. We therefore assessed whether variation in these genes associates with the clinical use of carbamazepine and phenytoin in cohorts of 425 and 281 patients, respectively. We report that a known functional polymorphism in CYP2C9 is highly associated with the maximum dose of phenytoin (P = 0.0066). We also show that an intronic polymorphism in the SCN1A gene shows significant association with maximum doses in regular usage of both carbamazepine and phenytoin (P = 0.0051 and P = 0.014, respectively). This polymorphism disrupts the consensus sequence of the 5' splice donor site of a highly conserved alternative exon (5N), and it significantly affects the proportions of the alternative transcripts in individuals with a history of epilepsy. These results provide evidence of a drug target polymorphism associated with the clinical use of AEDs and set the stage for a prospective evaluation of how pharmacogenetic diagnostics can be used to improve dosing decisions in the use of phenytoin and carbamazepine. Although the case made here is compelling, our results cannot be considered definitive or ready for clinical application until they are confirmed by independent replication.

Multidrug resistance in epilepsy and polymorphisms in the voltage-gated sodium channel genes SCN1A, SCN2A, and SCN3A: correlation among phenotype, genotype, and mRNA expression.

D E Kang,  Thomas Wong,  V Lui … (2008)
Many antiepileptic drugs (AEDs) prevent seizures by blocking voltage-gated brain sodium channels. However, treatment is ineffective in 30% of epilepsy patients, which might, at least in part, result from polymorphisms of the sodium channel genes. We investigated the association of AED responsiveness with genetic polymorphisms and correlated any association with mRNA expression of the neuronal sodium channels. We performed genotyping of tagging and candidate single nucleotide polymorphisms (SNPs) of SCN1A, 2A, and 3A in 471 Chinese epilepsy patients (272 drug responsive and 199 drug resistant). A total of 27 SNPs were selected based on the HapMap database. Genotype distributions in drug-responsive and drug-resistant patients were compared. SCN2A mRNA was quantified by real-time PCR in 24 brain and 57 blood samples. Its level was compared between patients with different genotypes of an SCN2A SNP found to be associated with drug responsiveness. SCN2A IVS7-32A>G (rs2304016) A alleles were associated with drug resistance (odds ratio = 2.1, 95% confidence interval: 1.2-3.7, P=0.007). Haplotypes containing the IVS7-32A>G allele A were also associated with drug resistance. IVS7-32A>G is located within the putative splicing branch site for splicing exons 7 and 9. PCR of reverse-transcribed RNA from blood or brain of patients with different IVS7-32A>G genotypes using primers in exons 7 and 9 showed no skipping of exon 8, and real-time PCR showed no difference in SCN2A mRNA levels among genotypes. Results of this study suggest an association between SCN2A IVS7-32A>G and AED responsiveness, without evidence of an effect on splicing or mRNA expression.