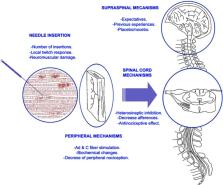 Biochemicals associated with pain and inflammation are elevated in sites near to and remote from active myofascial trigger points.

The efficacy of pain neuroscience education on musculoskeletal pain: A systematic review of the literature.

Do we need a third mechanistic descriptor for chronic pain states?