T1-mapping in the heart: accuracy and precision 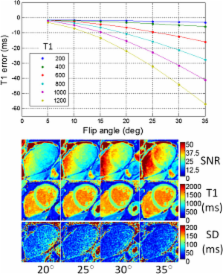 The longitudinal relaxation time constant (T1) of the myocardium is altered in various disease states due to increased water content or other changes to the local molecular environment. Changes in both native T1 and T1 following administration of gadolinium (Gd) based contrast agents are considered important biomarkers and multiple methods have been suggested for quantifying myocardial T1 in vivo. Characterization of the native T1 of myocardial tissue may be used to detect and assess various cardiomyopathies while measurement of T1 with extracellular Gd based contrast agents provides additional information about the extracellular volume (ECV) fraction. The latter is particularly valuable for more diffuse diseases that are more challenging to detect using conventional late gadolinium enhancement (LGE). Both T1 and ECV measures have been shown to have important prognostic significance.

T1-mapping has the potential to detect and quantify diffuse fibrosis at an early stage provided that the measurements have adequate reproducibility. Inversion recovery methods such as MOLLI have excellent precision and are highly reproducible when using tightly controlled protocols. The MOLLI method is widely available and is relatively mature. The accuracy of inversion recovery techniques is affected significantly by magnetization transfer (MT). Despite this, the estimate of apparent T1 using inversion recovery is a sensitive measure, which has been demonstrated to be a useful tool in characterizing tissue and discriminating disease. Saturation recovery methods have the potential to provide a more accurate measurement of T1 that is less sensitive to MT as well as other factors. Saturation recovery techniques are, however, noisier and somewhat more artifact prone and have not demonstrated the same level of reproducibility at this point in time.

This review article focuses on the technical aspects of key T1-mapping methods and imaging protocols and describes their limitations including the factors that influence their accuracy, precision, and reproducibility.

James Higgins,  Hayley J. Ridgway,  Sebastian Kozerke … (2004)
A novel pulse sequence scheme is presented that allows the measurement and mapping of myocardial T1 in vivo on a 1.5 Tesla MR system within a single breath-hold. Two major modifications of conventional Look-Locker (LL) imaging are introduced: 1) selective data acquisition, and 2) merging of data from multiple LL experiments into one data set. Each modified LL inversion recovery (MOLLI) study consisted of three successive LL inversion recovery (IR) experiments with different inversion times. We acquired images in late diastole using a single-shot steady-state free-precession (SSFP) technique, combined with sensitivity encoding to achieve a data acquisition window of < 200 ms duration. We calculated T1 using signal intensities from regions of interest and pixel by pixel. T1 accuracy at different heart rates derived from simulated ECG signals was tested in phantoms. T1 estimates showed small systematic error for T1 values from 191 to 1196 ms. In vivo T1 mapping was performed in two healthy volunteers and in one patient with acute myocardial infarction before and after administration of Gd-DTPA. T1 values for myocardium and noncardiac structures were in good agreement with values available from the literature. The region of infarction was clearly visualized. MOLLI provides high-resolution T1 maps of human myocardium in native and post-contrast situations within a single breath-hold. Copyright 2004 Wiley-Liss, Inc.

James Moon,  Daniel R Messroghli,  Peter Kellman … (2013)
Rapid innovations in cardiovascular magnetic resonance (CMR) now permit the routine acquisition of quantitative measures of myocardial and blood T1 which are key tissue characteristics. These capabilities introduce a new frontier in cardiology, enabling the practitioner/investigator to quantify biologically important myocardial properties that otherwise can be difficult to ascertain clinically. CMR may be able to track biologically important changes in the myocardium by: a) native T1 that reflects myocardial disease involving the myocyte and interstitium without use of gadolinium based contrast agents (GBCA), or b) the extracellular volume fraction (ECV)–a direct GBCA-based measurement of the size of the extracellular space, reflecting interstitial disease. The latter technique attempts to dichotomize the myocardium into its cellular and interstitial components with estimates expressed as volume fractions. This document provides recommendations for clinical and research T1 and ECV measurement, based on published evidence when available and expert consensus when not. We address site preparation, scan type, scan planning and acquisition, quality control, visualisation and analysis, technical development. We also address controversies in the field. While ECV and native T1 mapping appear destined to affect clinical decision making, they lack multi-centre application and face significant challenges, which demand a community-wide approach among stakeholders. At present, ECV and native T1 mapping appear sufficiently robust for many diseases; yet more research is required before a large-scale application for clinical decision-making can be recommended.