Regional differences in hepatitis C treatment with peginterferon and ribavirin in Japan: a retrospective cohort study 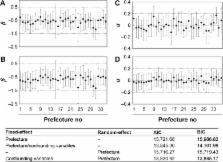 The aims of this study were to investigate regional differences in hepatitis C virus (HCV) infection treatment with peginterferon and ribavirin in Japan and to develop and validate statistical models for analysis of regional differences, using generalized linear mixed models.

Individuals with chronic HCV infection were identified from the Japanese Interferon Database (registered from December 2009 to April 2013). The total sustained virologic response rate and the rate in each prefecture were calculated. In the analysis using generalized linear mixed models, the following four models were constructed: 1) prefecture as a fixed effect, 2) prefecture and other confounding variables as fixed effects, 3) prefecture as a random effect, and 4) prefecture as a random effect and other confounding variables as fixed effects. The quality of the model fit was assessed using the Akaike information criterion and the Bayesian information criterion. All statistical analyses were performed using SAS Version 9.4 for Windows.

From 36 prefectures, 16,349 cases were recorded in the study period. Of these, 4,677 were excluded according to certain criteria. The total sustained virologic response rate was 59.9% (range, 43.9%–71.6%). The statistical model including prefecture as a random effect and other confounding variables as fixed effects showed the best fit based on the Akaike information criterion (13,830.92) and Bayesian information criterion (13,845.17).

Regional differences may exist in HCV infection treatment in Japan. The model including prefecture as a random effect and other confounding variables as fixed effects was appropriate for analysis of such regional differences. Additional studies considering the medical situations of each patient would provide useful information that could contribute to improve and standardize HCV infection treatment.

Diagnosis, management, and treatment of hepatitis C: an update.

An Update on Treatment of Genotype 1 Chronic Hepatitis C Virus Infection: 2011 Practice Guideline by the American Association for the Study of Liver Diseases

Regional variation in patients and outcomes in the Treatment of Preserved Cardiac Function Heart Failure With an Aldosterone Antagonist (TOPCAT) trial.

Marc Pfeffer,  Brian Claggett,  Susan Assmann … (2015)
Treatment of Preserved Cardiac Function Heart Failure With an Aldosterone Antagonist (TOPCAT) patients with heart failure and preserved left ventricular ejection fraction assigned to spironolactone did not achieve a significant reduction in the primary composite outcome (time to cardiovascular death, aborted cardiac arrest, or hospitalization for management of heart failure) compared with patients receiving placebo. In a post hoc analysis, an ≈4-fold difference was identified in this composite event rate between the 1678 patients randomized from Russia and Georgia compared with the 1767 enrolled from the United States, Canada, Brazil, and Argentina (the Americas).