Effects of YuPingFeng granules on acute exacerbations of COPD: a randomized, placebo-controlled study 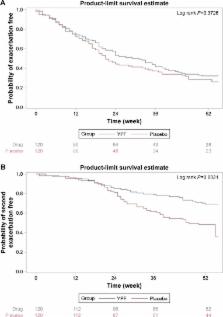 This was a randomized, double-blind, parallel, placebo-controlled study of 240 patients from eight centers in China. Participants were eligible if they had mild to severe COPD as defined by Global Initiative for Chronic Obstructive Lung Disease, had a history of at least two COPD exacerbations or one hospitalization within the previous year, and had remained clinically stable for over 4 weeks before the study. They were randomly assigned to receive 5 g of YuPingFeng or placebo, three times per day, for 1 year. The primary end point was the exacerbation rate over 1 year, and the analysis was by intention to treat. Secondary end points included symptom score, which was assessed by COPD assessment test (CAT) score and safety profiles. This trial was registered in the Chinese Clinical Trial Registry ( http://www.chictr.org.cn; registration number: ChiCTR-IPR-15007023).

YuPingFeng granules can be considered as a treatment option for COPD; this treatment prevents acute exacerbations of COPD and has a good safety profile.

Qiang Li,  Lan Yang,  Zhen Wang … (2008)
Chronic obstructive pulmonary disease (COPD) is characterised by airflow limitation, and has many components including mucus hypersecretion, oxidative stress, and airway inflammation. We aimed to assess whether carbocisteine, a mucolytic agent with anti-inflammatory and antioxidation activities, could reduce the yearly exacerbation rate in patients with COPD. We did a randomised, double-blind, placebo-controlled study of 709 patients from 22 centres in China. Participants were eligible if they were diagnosed as having COPD with a postbronchodilator forced expiratory volume in 1 s (FEV(1)) to forced vital capacity (FVC) ratio (FEV(1)/FVC) of less than 0.7 and an FEV(1) between 25% and 79% of the predicted value, were aged between 40 and 80 years, had a history of at least two COPD exacerbations within the previous 2 years, and had remained clinically stable for over 4 weeks before the study. Patients were randomly assigned to receive 1500 mg carbocisteine or placebo per day for a year. The primary endpoint was exacerbation rate over 1 year, and analysis was by intention to treat. This trial is registered with the Japan Clinical Trials Registry (http://umin.ac.jp/ctr/index/htm) number UMIN-CRT C000000233. 354 patients were assigned to the carbocisteine group and 355 to the placebo group. Numbers of exacerbations per patient per year declined significantly in the carbocisteine group compared with the placebo group (1.01 [SE 0.06] vs 1.35 [SE 0.06]), risk ratio 0.75 (95% CI 0.62-0.92, p=0.004). Non-significant interactions were found between the preventive effects and COPD severity, smoking, as well as concomitant use of inhaled corticosteroids. Carbocisteine was well tolerated. Mucolytics, such as carbocisteine, should be recognised as a worthwhile treatment for prevention of exacerbations in Chinese patients with COPD.