Regulation of skeletal muscle growth by the IGF1-Akt/PKB pathway: insights from genetic models 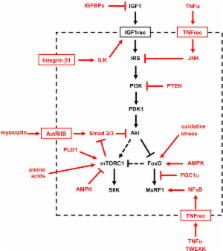 A highly conserved signaling pathway involving insulin-like growth factor 1 (IGF1), and a cascade of intracellular components that mediate its effects, plays a major role in the regulation of skeletal muscle growth. A central component in this cascade is the kinase Akt, also called protein kinase B (PKB), which controls both protein synthesis, via the kinases mammalian target of rapamycin (mTOR) and glycogen synthase kinase 3β (GSK3β), and protein degradation, via the transcription factors of the FoxO family. In this paper, we review the composition and function of this pathway in skeletal muscle fibers, focusing on evidence obtained in vivo by transgenic and knockout models and by muscle transient transfection experiments. Although this pathway is essential for muscle growth during development and regeneration, its role in adult muscle response to mechanical load is less clear. A full understanding of the operation of this pathway could help to design molecularly targeted therapeutics aimed at preventing muscle wasting, which occurs in a variety of pathologic contexts and in the course of aging.

Jeh-Ping Liu,  Julie Baker,  Archlbald Perkins … (1993)
Newborn mice homozygous for a targeted disruption of insulin-like growth factor gene (Igf-1) exhibit a growth deficiency similar in severity to that previously observed in viable Igf-2 null mutants (60% of normal birthweight). Depending on genetic background, some of the Igf-1(-/-) dwarfs die shortly after birth, while others survive and reach adulthood. In contrast, null mutants for the Igf1r gene die invariably at birth of respiratory failure and exhibit a more severe growth deficiency (45% normal size). In addition to generalized organ hypoplasia in Igf1r(-/-) embryos, including the muscles, and developmental delays in ossification, deviations from normalcy were observed in the central nervous system and epidermis. Igf-1(-/-)/Igf1r(-/-) double mutants did not differ in phenotype from Igf1r(-/-) single mutants, while in Igf-2(-)/Igf1r(-/-) and Igf-1(-/-)/Igf-2(-) double mutants, which are phenotypically identical, the dwarfism was further exacerbated (30% normal size). The roles of the IGFs in mouse embryonic development, as revealed from the phenotypic differences between these mutants, are discussed.

Jonathan Glass,  Walter R Frontera,  Nicholas Tawa … (2004)
Muscle wasting accompanies aging and pathological conditions ranging from cancer, cachexia, and diabetes to denervation and immobilization. We show that activation of NF-kappaB, through muscle-specific transgenic expression of activated IkappaB kinase beta (MIKK), causes profound muscle wasting that resembles clinical cachexia. In contrast, no overt phenotype was seen upon muscle-specific inhibition of NF-kappaB through expression of IkappaBalpha superrepressor (MISR). Muscle loss was due to accelerated protein breakdown through ubiquitin-dependent proteolysis. Expression of the E3 ligase MuRF1, a mediator of muscle atrophy, was increased in MIKK mice. Pharmacological or genetic inhibition of the IKKbeta/NF-kappaB/MuRF1 pathway reversed muscle atrophy. Denervation- and tumor-induced muscle loss were substantially reduced and survival rates improved by NF-kappaB inhibition in MISR mice, consistent with a critical role for NF-kappaB in the pathology of muscle wasting and establishing it as an important clinical target for the treatment of muscle atrophy.

Role of insulin-like growth factors in embryonic and postnatal growth.

Julie Baker,  Jeh-Ping Liu,  Elizabeth J. Robertson … (1993)
A developmental analysis of growth kinetics in mouse embryos carrying null mutations of the genes encoding insulin-like growth factor I (IGF-I), IGF-II, and the type 1 IGF receptor (IGF1R), alone or in combination, defined the onset of mutational effects leading to growth deficiency and indicated that between embryonic days 11.0 and 12.5, IGF1R serves only the in vivo mitogenic signaling of IGF-II. From E13.5 onward, IGF1R interacts with both IGF-I and IGF-II, while IGF-II recognizes an additional unknown receptor (XR). In contrast with the embryo proper, placental growth is served exclusively by an IGF-II-XR interaction. Additional genetic data suggested that the type 2IGF/mannose 6-phosphate receptor is an unlikely candidate for XR. Postnatal growth curves indicated that surviving Igf-1(-/-) mutants, which are infertile and exhibit delayed bone development, continue to grow with a retarded rate after birth in comparison with wild-type littermates and become 30% of normal weight as adults.