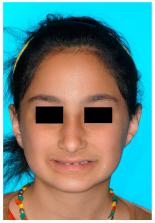 Background: Ectodermal dysplasia describes a heterogeneous group of hereditary, congenital malformations involving developmental dystrophies of ectodermal structures. The aim of this study was to analyse the oral health-related quality of life (OHRQoL) in people with ectodermal dysplasia and to evaluate the influence of different variables. Methods: The study was designed as an anonymous epidemiological survey study among people with ectodermal dysplasia to evaluate oral symptoms, satisfaction with the health system and their respective OHRQoL using the validated German version of the OHIP-14 (Oral Health Impact Profile) questionnaire. Results: When asked about oral symptoms, 110 of the participants provided responses, of which 109 (99.09%) described oral symptoms. The average age of the female participants at the time of diagnosis was 17.02 years (range: 0 to 48 years), the average age of men was 5.19 years (range: 0 to 43 years). The average OHIP-14 overall score for female participants was 12.23 points (SD: 12.39), for male participants an average OHIP score of 11.79 points was recorded (SD: 11.08 points). Difficulty in finding a dentist ( p = 0.001), and the dissatisfaction with the health system ( p = 0.007) showed a negative impact on the OHRQoL. Conclusion: People with ectodermal dysplasia rate their OHRQoL worse than is usually prevalent in the normal German population (4.09 points); women are diagnosed with “ectodermal dysplasia” later than men. Participants who reported difficulties in finding a dentist for treatment exhibited higher OHIP values. Likewise, dissatisfaction with the health system demonstrated a negative impact on the oral health-related quality of life.

Tuija M Mikkola (2009)
Hypohidrotic (anhidrotic) ectodermal dysplasia (HED) is a congenital syndrome characterized by sparse hair, oligodontia, and reduced sweating. It is caused by mutations in any of the three Eda pathway genes: ectodysplasin (Eda), Edar, and Edaradd which encode a ligand, a receptor, and an intracellular signal mediator of a single linear pathway, respectively. In rare cases, HED is associated with immune deficiency caused by mutations in further downstream components of the Eda pathway that are necessary for the activation of the transcription factor NF-kappaB. Here I present a brief research update on the molecular aspects of this evolutionarily conserved pathway. The developmental role of Eda will be discussed in light of loss- and gain-of-function mouse models with emphasis on the past few years. (c) 2009 Wiley-Liss, Inc.

WNT10A mutations are a frequent cause of a broad spectrum of ectodermal dysplasias with sex-biased manifestation pattern in heterozygotes.

Axel Bohring,  Thomas Stamm,  Christiane Spaich … (2009)
Odonto-onycho-dermal dysplasia (OODD), a rare autosomal-recessive inherited form of ectodermal dysplasia including severe oligodontia, nail dystrophy, palmoplantar hyperkeratosis, and hyperhidrosis, was recently shown to be caused by a homozygous nonsense WNT10A mutation in three consanguineous Lebanese families. Here, we report on 12 patients, from 11 unrelated families, with ectodermal dysplasia caused by five previously undescribed WNT10A mutations. In this study, we show that (1) WNT10A mutations cause not only OODD but also other forms of ectodermal dysplasia, reaching from apparently monosymptomatic severe oligodontia to Schöpf-Schulz-Passarge syndrome, which is so far considered a unique entity by the findings of numerous cysts along eyelid margins and the increased risk of benign and malignant skin tumors; (2) WNT10A mutations are a frequent cause of ectodermal dysplasia and were found in about 9% of an unselected patient cohort; (3) about half of the heterozygotes (53.8%) show a phenotype manifestation, including mainly tooth and nail anomalies, which was not reported before in OODD; and (4) heterozygotes show a sex-biased manifestation pattern, with a significantly higher proportion of tooth anomalies in males than in females, which may implicate gender-specific differences of WNT10A expression.

Philippe P. Hujoel,  Linda LeResche,  Diana L. Miglioretti … (2006)
We report the development and psychometric evaluation of short forms of the Oral Health Impact Profile German version (OHIP-G) - an instrument to assess oral health-related quality of life (OHRQoL). A five-item short form was developed using best subset regression in 2050 subjects from a national survey. Two 14-item versions were derived from English-language short forms and a 21-item version from previous factor analytic work. A second sample from the general population (n = 163) and a sample of clinical patients with temporomandibular disorders (TMD; n = 175) were used to investigate validity and internal consistency. Test-retest reliability was evaluated in 30 prosthodontic patients before treatment. Responsiveness was assessed in 67 patients treated for their TMD pain. Associations between short form summary scores and self-report of oral health and four oral disorders in the general population and in TMD patients were interpreted as support for convergent/groups validity. The instruments' responsiveness (effect measures of 0.55-0.98), test-retest reliability (intraclass correlation coefficients: 0.72-0.87), and internal consistency (Cronbach's alpha: 0.65-0.92) were sufficient. Sufficient discriminative and evaluative psychometric properties of short forms of the OHIP-G make the instruments suitable to assess OHRQoL in cross-sectional as well as longitudinal studies.