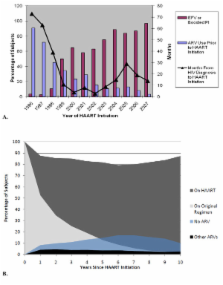 To examine the outcomes of highly-active antiretroviral therapy (HAART) for individuals with free access to healthcare, we evaluated 2327 patients in a cohort study composed of military personnel and beneficiaries with HIV infection who initiated HAART from 1996 to the end of 2007.

Outcomes analyzed were virologic suppression (VS) and failure (VF), CD4 count changes, AIDS and death. VF was defined as never suppressing or having at least one rebound event. Multivariate (MV) analyses stratified by the HAART initiation year (before or after 2000) were performed to identify risk factors associated with these outcomes.

In this observational cohort, VS rates approach those described in clinical trials. Initiating HAART on active duty was associated with even better outcomes. These findings support the notion that free access to healthcare likely improves the response to HAART thereby reducing HIV-related morbidity and mortality.

Estimation of HIV incidence in the United States.

Qian An,  Edward H. Kaplan,  Robert Janssen … (2008)
Incidence of human immunodeficiency virus (HIV) in the United States has not been directly measured. New assays that differentiate recent vs long-standing HIV infections allow improved estimation of HIV incidence. To estimate HIV incidence in the United States. Remnant diagnostic serum specimens from patients 13 years or older and newly diagnosed with HIV during 2006 in 22 states were tested with the BED HIV-1 capture enzyme immunoassay to classify infections as recent or long-standing. Information on HIV cases was reported to the Centers for Disease Control and Prevention through June 2007. Incidence of HIV in the 22 states during 2006 was estimated using a statistical approach with adjustment for testing frequency and extrapolated to the United States. Results were corroborated with back-calculation of HIV incidence for 1977-2006 based on HIV diagnoses from 40 states and AIDS incidence from 50 states and the District of Columbia. Estimated HIV incidence. An estimated 39,400 persons were diagnosed with HIV in 2006 in the 22 states. Of 6864 diagnostic specimens tested using the BED assay, 2133 (31%) were classified as recent infections. Based on extrapolations from these data, the estimated number of new infections for the United States in 2006 was 56,300 (95% confidence interval [CI], 48,200-64,500); the estimated incidence rate was 22.8 per 100,000 population (95% CI, 19.5-26.1). Forty-five percent of infections were among black individuals and 53% among men who have sex with men. The back-calculation (n = 1.230 million HIV/AIDS cases reported by the end of 2006) yielded an estimate of 55,400 (95% CI, 50,000-60,800) new infections per year for 2003-2006 and indicated that HIV incidence increased in the mid-1990s, then slightly declined after 1999 and has been stable thereafter. This study provides the first direct estimates of HIV incidence in the United States using laboratory technologies previously implemented only in clinic-based settings. New HIV infections in the United States remain concentrated among men who have sex with men and among black individuals.

Matthias T F Wolf,  George N. Phillips,  Jonathan Sterne … (2002)
Insufficient data are available from single cohort studies to allow estimation of the prognosis of HIV-1 infected, treatment-naive patients who start highly active antiretroviral therapy (HAART). The ART Cohort Collaboration, which includes 13 cohort studies from Europe and North America, was established to fill this knowledge gap. We analysed data on 12,574 adult patients starting HAART with a combination of at least three drugs. Data were analysed by intention-to-continue-treatment, ignoring treatment changes and interruptions. We considered progression to a combined endpoint of a new AIDS-defining disease or death, and to death alone. The prognostic model that generalised best was a Weibull model, stratified by baseline CD4 cell count and transmission group. FINDINGS During 24,310 person-years of follow up, 1094 patients developed AIDS or died and 344 patients died. Baseline CD4 cell count was strongly associated with the probability of progression to AIDS or death: compared with patients starting HAART with less than 50 CD4 cells/microL, adjusted hazard ratios were 0.74 (95% CI 0.62-0.89) for 50-99 cells/microL, 0.52 (0.44-0.63) for 100-199 cells/microL, 0.24 (0.20-0.30) for 200-349 cells/microL, and 0.18 (0.14-0.22) for 350 or more CD4 cells/microL. Baseline HIV-1 viral load was associated with a higher probability of progression only if 100,000 copies/microL or above. Other independent predictors of poorer outcome were advanced age, infection through injection-drug use, and a previous diagnosis of AIDS. The probability of progression to AIDS or death at 3 years ranged from 3.4% (2.8-4.1) in patients in the lowest-risk stratum for each prognostic variable, to 50% (43-58) in patients in the highest-risk strata. The CD4 cell count at initiation was the dominant prognostic factor in patients starting HAART. Our findings have important implications for clinical management and should be taken into account in future treatment guidelines.

Scaling up of highly active antiretroviral therapy in a rural district of Malawi: an effectiveness assessment.

Nathan Ford,  Limangeni Mankhambo,  Gaëlle Fedida … (2006)
The recording of outcomes from large-scale, simplified HAART (highly active antiretroviral therapy) programmes in sub-Saharan Africa is critical. We aimed to assess the effectiveness of such a programme held by Médecins Sans Frontières (MSF) in the Chiradzulu district, Malawi. We scaled up and simplified HAART in this programme since August, 2002. We analysed survival indicators, CD4 count evolution, virological response, and adherence to treatment. We included adults who all started HAART 6 months or more before the analysis. HIV-1 RNA plasma viral load and self-reported adherence were assessed on a subsample of patients, and antiretroviral resistance mutations were analysed in plasma with viral loads greater than 1000 copies per mL. Analysis was by intention to treat. Of the 1308 patients who were eligible, 827 (64%) were female, the median age was 34.9 years (IQR 29.9-41.0), and 1023 (78%) received d4T/3TC/NVP (stavudine, lamivudine, and nevirapine) as a fixed-dose combination. At baseline, 1266 individuals (97%) were HAART-naive, 357 (27%) were at WHO stage IV, 311 (33%) had a body-mass index of less than 18.5 kg/m2, and 208 (21%) had a CD4 count lower than 50 cells per muL. At follow-up (median 8.3 months, IQR 5.5-13.1), 967 (74%) were still on HAART, 243 (19%) had died, 91 (7%) were lost to follow-up, and seven (0.5%) discontinued treatment. Low body-mass index, WHO stage IV, male sex, and baseline CD4 count lower than 50 cells per muL were independent determinants of death in the first 6 months. At 12 months, the probability of individuals still in care was 0.76 (95% CI 0.73-0.78) and the median CD4 gain was 165 (IQR 67-259) cells per muL. In the cross-sectional survey (n=398), 334 (84%) had a viral load of less than 400 copies per mL. Of several indicators measuring adherence, self-reported poor adherence (<80%) in the past 4 days was the best predictor of detectable viral load (odds ratio 5.4, 95% CI 1.9-15.6). These data show that large numbers of people can rapidly benefit from antiretroviral therapy in rural resource-poor settings and strongly supports the implementation of such large-scale simplified programmes in Africa.