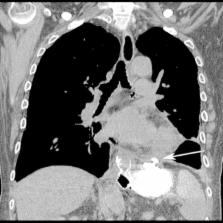 Gastropericardial fistula: a case report and review of literature.

Expression patterns of transforming growth factor-beta and its receptors in gastric mucosa of patients with refractory gastric ulcer.

Chan-Pin Lin,  Shou-Ping Shih,  Wen-Yih Tseng … (2005)
Transforming growth factor-beta (TGF-beta) plays a regulatory role in tissue repair. In a previous study, we found that TGF-beta and its receptors were expressed in gastric mucosa of patients with well-healed gastric ulcers, as demonstrated by immunohistochemistry. To further characterize the role of TGF-beta and its receptors in repairing gastric ulcers, we investigated the expression patterns of TGF-beta and its receptors in gastric mucosa by in situ hybridization and reverse transcriptase-polymerase chain reaction (RT-PCR). Seventy-four patients with endoscopically proven gastric ulcers were eligible for participation in this study. All patients had routine biopsies on initial endoscopy and were then treated for 12 wk with an H2 blocker. Repeat endoscopy was then performed. There were 8 patients with poorly healed ulcers, and biopsies were taken from the margin of the residual ulcers. These tissue samples, along with biopsy of gastric mucosa near the original ulcers from 8 randomly selected patients with well-healed ulcers were examined for TGF-beta and TGF-beta receptor II mRNA by RT-PCR and in situ hybridization, as well as immunohistochemistry. TGF-beta and TGF-beta receptor II were strongly expressed in tissues from patients with well-healed ulcers. Four of the 8 patients with poor healing had low or absent expression of TGF-beta or TGF-beta receptor II mRNA. All cases positive by RT-PCR assay were confirmed by in situ hybridization as well as immunohistochemistry. It is suggested that TGF-beta and its receptors are important for gastric ulcer healing. These results may have implications for further investigation of the healing process and in predicting response to therapy.

Dr. Hal is in the Department of Radiology at the Penn State Hershey Medical Center, Hershey PA.

Dr. Tappouni is in the Department of Radiology at Wake Forest University School of Medicine, Winston-Salem NC.