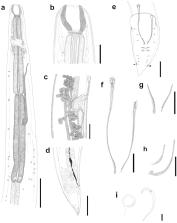 A new species of Procamallanus Baylis, 1923 was found as a parasite of the fish Astronotus ocellatus (Agassiz, 1831) from a lake in the Jardim Botânico Bosque Rodrigues Alves, Belém, Brazil. Procamallanus spiculastriatus sp. n. has a smooth buccal capsule and a well-developed basal ring that is armed with four sclerotized tooth-like structures. The male of the new species is similar to the two species that are known from Brazilian fish, P. peraccuratus Pinto, Fábio, Noronha & Rolas, 1976, and P. annipetterae Kohn & Fernandes, 1988, by the absence of the gubernaculum. It differs from these two by the morphology of the buccal capsule, the number are arrangement of the caudal papillae in males, the size and morphology of the spicules and the shape of the tail of both sexes. Procamallanus spiculastriatus sp. n. is the third species discovered in fish from Brazil. This finding extends the geographical distribution of the genus into the Brazilian Amazon.

Eva Cernotíková-Stříbrná,  Aleš Horák,  František Moravec (2011)
Abstract: Small subunit rRNA sequences were obtained from 38 representatives mainly of the nematode orders Spirurida (Camallanidae, Cystidicolidae, Daniconematidae, Philometridae, Physalopteridae, Rhabdochonidae, Skrjabillanidae) and, in part, Ascaridida (Anisakidae, Cucullanidae, Quimperiidae). The examined nematodes are predominantly parasites of fishes. Their analyses provided well-supported trees allowing the study ofphylogenetic relationships among some spirurine nematodes. The present results support the placement of Cucullanidae at the base of the suborder Spirurina and, based on the position of the genus Philonema (subfamily Philoneminae) forming a sister group to Skrjabillanidae (thus Philoneminae should be elevated to Philonemidae), the paraphyly of the Philometridae. Comparison of a large number of sequences of representatives of the latter family supports the paraphyly of the genera Philometra, Philometroides and Dentiphilometra. The validity of the newly included genera Afrophilometra and Caranginema is not supported. These results indicate geographical isolation has not been the cause of speciation in this parasite group and no coevolution with fish hosts is apparent. On the contrary, the group of South-American species ofAlinema, Nilonema and Rumai is placed in an independent branch, thus markedly separated from other family members. Molecular data indicate that the skrjabillanid subfamily Esocineminae (represented by Esocinema bohemicum) should be either elevated to the rank of an independent family or Daniconematidae (Mexiconema africanum) should be decreased to Daniconematinae and transferred to the family Skrjabillanidae. Camallanid genera Camallanus and Procamallanus, as well as the subgenera Procamallanus and Spirocamallanus are confirmed to be paraphyletic. Paraphyly has also been found within Filarioidea, Habronematoidea and Thelazioidea and in Cystidicolidae, Physalopteridae and Thelaziidae. The results of the analyses also show that Neoascarophis, Spinitectus and Rhabdochona are monophyletic, in contrast to the paraphyletic genus Ascarophis. They further confirm the independence of two subgenera, Rhabdochona and Globochona, in the genus Rhabdochona. The necessity of further studies of fish-parasitizing representatives of additional nematode families not yet studied by molecular methods, such as Guyanemidae, Lucionematidae or Tetanonematidae, is underscored.

Seasonal influence on the parasite fauna of a wild population of Astronotus ocellatus (Perciformes: Cichlidae) from the Brazilian Amazon.

Lígia R Neves,  José L Luque,  M. Tavares-Dias … (2013)
Parasite infracommunities were studied in 202 specimens of Astronotus ocellatus collected from a freshwater lake in the State of Amapá, northern Brazil. Relationships between some host attributes (i.e., ontogeny, sex, and body size) and parasite infections were analyzed, but the primary focus was the seasonal variation in the parasite fauna. In total, 6,308,912 parasites belonging to 11 different taxa were found. Protozoa were the most abundant and dominant taxa, but monogeneans, trematode metacercariae, and nematode larvae were also prevalent and abundant. Fish ontogeny had a weak influence on parasite infection rates; juveniles were more parasitized by Dolops nana and Posthodiplostomum sp. The abundances of all parasite species were weakly correlated with host body size (low r(2) values), except D. nana, Contracaecum sp., and Posthodiplostomum sp., which exhibited no correlation between abundance and host body size. Prevalence and abundance were different between flood and drainage seasons for all parasite species, except for D. nana and the 2 metacercarial species. Astronotus ocellatus may represent a link in food-web transmissions for parasites because it is used both as definitive and intermediate host. The parasite fauna of A. ocellatus was composed primarily of ectoparasites, and this could be considered typical of fishes that inhabit lentic waters. Seasonality was a strong determinant in the parasite community structure.