Anxiety and depression in patients with endometriosis: impact and management challenges 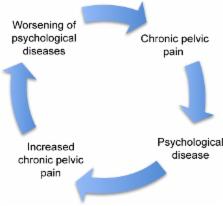 Endometriosis is one of the most common gynecological diseases and affects ~10% of women in reproductive age. The most common clinical signs of endometriosis are menstrual irregularities, chronic pelvic pain (CPP), dysmenorrhea, dyspareunia and infertility. Symptoms of endometriosis often affect psychological and social functioning of patients. For this reason, endometriosis is considered as a disabling condition that may significantly compromise social relationships, sexuality and mental health. Considering this point, the aim of this narrative review is to elucidate the impact of anxiety and depression in the management of women with endometriosis. Psychological factors have an important role in determining the severity of symptoms, and women who suffer from endometriosis report high levels of anxiety, depression and other psychiatric disorders. In addition, endometriosis is one of the most important causes of CPP; women with endometriosis suffer from a wide range of pelvic pain such as dysmenorrhea, dyspareunia, nonmenstrual (chronic) pelvic pain, pain at ovulation, dyschezia and dysuria. Several studies have underlined the influence of CPP on quality of life and psychological well-being of women with endometriosis. Data suggest that the experience of pelvic pain is an important component of endometriosis and may significantly affect emotive functioning of affected women. It has been demonstrated that high levels of anxiety and depression can amplify the severity of pain. Further studies are needed to better understand the relationship between psychological factors and perception of pain. Treatment of endometriosis may be hormonal or surgical. Surgery is the primary treatment for more severe forms of endometriosis. There are few data in the literature about the influence of psychological factors and psychiatric comorbidities on the effectiveness of treatments. It is important to evaluate the presence of previous psychiatric diseases in order to select the most appropriate treatment for the patient.

Paola Viganò,  Fabio Parazzini,  Edgardo Somigliana … (2004)
Estimates of the frequency of endometriosis vary widely. Based on the few reliable data, the prevalence of the condition can reasonably be assumed to be around 10%. Although no consistent information is available on the incidence of the disease, temporal trends suggest an increase among women of reproductive age. This could be explained-at least in part-by changing reproductive habits. Numerous epidemiological studies have indicated that nulliparous women and women reporting short and heavy menstrual cycles are at increased risk of developing endometriosis; data on other risk factors are less consistent. These epidemiological findings strongly support the menstrual reflux hypothesis. Additional evidence in favour of this theory includes the demonstration of viable endometrial cells in the menstrual effluent and peritoneal fluid, experimental implantation and growth of endometrium within the peritoneal cavity, observation of some degree of retrograde menstruation in most women undergoing laparoscopy during menses, and an association between obstructed menstrual outflow and endometriosis.

Carlo Bulletti,  Maria Elisabetta Coccia,  Silvia Battistoni … (2010)
Endometriosis is a debilitating condition characterized by high recurrence rates. The etiology and pathogenesis remain unclear. Typically, endometriosis causes pain and infertility, although 20-25% of patients are asymptomatic. The principal aims of therapy include relief of symptoms, resolution of existing endometriotic implants, and prevention of new foci of ectopic endometrial tissue. Current therapeutic approaches are far from being curative; they focus on managing the clinical symptoms of the disease rather than fighting the disease. Specific combinations of medical, surgical, and psychological treatments can ameliorate the quality of life of women with endometriosis. The benefits of these treatments have not been entirely demonstrated, particularly in terms of expectations that women hold for their own lives. Although theoretically advantageous, there is no evidence that a combination medical-surgical treatment significantly enhances fertility, and it may unnecessarily delay further fertility therapy. Randomized controlled trials are required to demonstrate the efficacy of different treatments.

The epidemiology of endometriosis.

Daniel Cramer,  Stacey Missmer (2002)
Advances in understanding the epidemiology of endometriosis have lagged behind other diseases because of methodologic problems related to disease definition and control selection. Nevertheless, a better picture of the epidemiology of endometriosis has emerged over the past few decades. Prevalence estimates of the disease in clinic populations vary from about a 4% occurrence of largely asymptomatic endometriosis found in women undergoing tubal ligation to 50% of teenagers with intractable dysmenorrhea. General population incidence during the 1970s in this country has been suggested to be 1.6 per 1000 white females aged 15-49, while a more current study based upon hospital discharges finds endometriosis as a first listed diagnosis in 1.3 per 1000 discharges in women aged 15-44. There is a clinical impression that blacks have lower rates of endometriosis and Orientals have higher rates than whites. A variety of personal risk factors for endometriosis have also been described. Women with endometriosis may be taller and thinner. Menstrual factors reported to increase risk include dysmenorrhea, early menarche, and shorter cycle lengths. There is support for the idea that lifestyle exposures that might raise or lower estrogen levels could affect risk, including a decreased risk associated with smoking and exercise and an increased risk associated with caffeine or alcohol use. These risk factors appear to be compatible with the central importance of retrograde menstruation influenced by outflow obstruction that might affect its amount, immune factors that might affect its ability to be cleared, or hormonal stimuli that might affect its growth. In this model, dysmenorrhea could be either a disease symptom or a manifestation of outflow obstruction. Nulliparity could be either a consequence of disease or a cause since nulliparous women would not have the benefit of cervical dilation associated with labor and delivery. Since there is evidence that family history is a risk factor for disease, a challenge is how to integrate genetic factors into the model. The genetics of endometriosis might be advanced if we could identify an "endometriosis phenotype". We propose that this may consist of early menarche, short cycles, painful periods, subfertility, and possibly tall stature that could be explained by genetic factors that predispose to poor endowment of germ cells and canalization defects of the cervix. The value of establishing an "endometriosis phenotype" is that, as candidates for genetic markers are identified, particular genotypes can be correlated with these factors even if a formal diagnosis of endometriosis has not been made. Additional well-designed case-control and cohort studies will be necessary to test theories related to pathogenesis, establish the precise relationship between reproductive morbidity and endometriosis, identify specific genetic factors, and establish long-term risks.